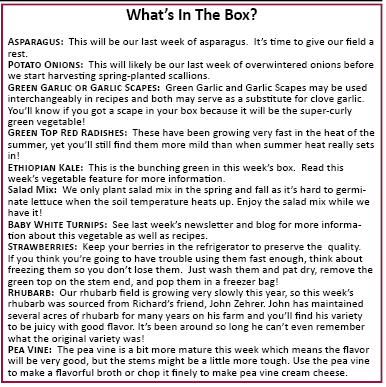 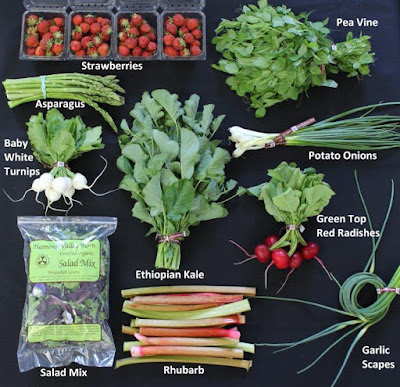 Cooking with This Week’s Box!

“A recipe has no soul, you as the cook must bring soul to the recipe.” – Thomas Keller

Wow!  We have a treat for you in this week’s box….STRAWBERRIES!  They started ripening at the end of last week, but with the warm days we’ve had they’ve been ripening fast.  So what are you going to do with all these strawberries!?  Well, of course you’ll probably want to just eat some fresh, right out of the container.  I like to have fresh strawberries with vanilla yogurt or on my morning bowl of cereal during strawberry season.  If you are looking for some ideas for tasty desserts to make with your strawberries, check out 21 Recipes to Celebrate Strawberry Season at NY Times.com.  They feature delicious recipes such as Double Strawberry Cheesecake and Strawberries with Swedish Cream.   If you are afraid you can’t eat all the strawberries before they go bad, give them a quick rinse, pat dry, remove the green top on the stem end and then pop the whole berries into a freezer bag and stick them in the freezer.  You’ll be glad you took a little bit of time to do so when you pull them out and enjoy them during the winter.

Ok, so what are we going to do with the rest of the box!  Well, lets start with the rhubarb.  You could make a pie, but I think Rhubarb Vinaigrette would be delicious tossed on the salad mix in this week’s box.  This recipe suggests adding fresh strawberries and almonds to the salad as well.  You may not need all of the rhubarb to make a vinaigrette, so use the remainder to make Rhubarb Chutney.  Use the chutney as a spread on a grilled ham and cheese sandwich.  The chutney recipe calls for onions and garlic cloves, but you can substitute the potato onions in this week’s box as well as either green garlic or garlic scapes.

Ethiopian Kale might be a new vegetable for many people, but it’s really quite similar to kale or collards and can be used as such in any recipe.  I’d suggest making the Ethiopian Kale and Black Eyed Pea Gratin featured in this week’s newsletter.  It’s a simple dish to make and you can eat it for dinner as a main dish or as a side dish with roasted chicken or grilled pork chops. If you have any left over, heat it up for breakfast and eat it with a fried egg on the side.

One of my favorite ways to eat the baby white turnips is to make the recipe for White Turnip Salad with Miso Ginger Vinaigrette featured in our newsletter back on May 25, 2012.  It uses the green tops and the white roots, is very simple to make, and even people who say they don’t like turnips will eat this salad!

If you haven’t made Pea Vine Cream Cheese yet, this might be the week to do so.  It’s delicious spread on a bagel or a wrap and then topped with thin slices of red radishes and a sprinkling of salt.  You can also fold it into scrambled eggs, or use it as a spread for a cold vegetable pizza.

Farmer Richard tells us to “Eat your greens every day!”  That includes the radish tops as well!  Use the radishes and their tops to make this tasty Rustic Radish Soup featured at Food 52.

Well, the only thing left from this week’s box is the asparagus.  I’m tempted to just keep it simple to enjoy the final taste of asparagus for the season.  Saute it lightly in butter, season with a touch of salt and pepper and just simply eat it!

If you haven’t already made plans to join us for Strawberry Day on Sunday, June 18, we hope you’ll consider making the trip to the farm.  We’re going to have a great time and will be eating lots of fresh strawberries.  Hope to see you soon!—Chef Andrea
_____________________________
Featured Vegetable:  Ethiopian Kale 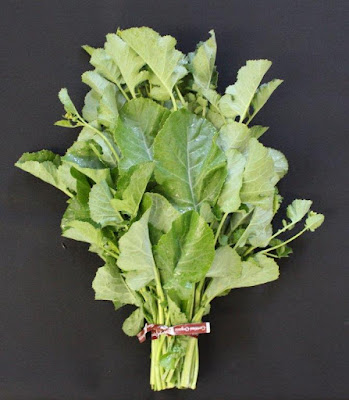 The bunching green in your box this week is called Ethiopian Kale. It actually originated in Ethiopia where it is a very common green.  It is known by other names as well including Amara Greens, Ethiopian Blue Mustard, Highland Kale and in Ethiopia the name is Gomenzer. So is it a mustard or a kale? Technically it’s classified as a mustard, and if you eat a piece of it raw you’ll get a pungent, spicy, peppery bite that is the characteristic mustard flavor.  However, it does share some qualities that are more similar to that of kale and collards.  It has a sturdy, thick leaf and a thicker stem that bears more resemblance to kale than traditional mustard greens. Nearly the entire portion of plant in your bunch is edible.  The thick stems are still tender and just need to be chopped into bite-sized or smaller pieces.  Both the stem and leaves require a little longer cooking time with some liquid to make them tender.  When cooked, the flavor mellows significantly and you lose much of the sharpness you get if you try it raw.

We read about this vegetable several years ago in a culinary magazine, but it’s just been within the last few years that seed has been available in the United States.  Menkir Tamrat is the man credited with introducing this vegetable crop to the United States. His story was told in the Fall/Winter 2011 issue of Edible Magazine for the Bay Area of California. Tamrat came to the United States from Ethiopia in 1971 to go to school. He had every intention to return to his country, however a revolution occurred in that country in 1974 and came under the rule of a Soviet-backed military ruler.  Tamrat was not able to return to his country and stayed in the U.S.  He found it very hard to find his traditional foods in the U.S. and, after growing tired of trying to make substitutions, decided to start growing some of his traditional foods himself. Eventually he connected with Fred Hempel, a plant biologist and owner of a farm and nursery in California. Tamrat got seeds from Ethiopia and, together with Hempel, they started growing them out and producing more seed. While Ethiopian Kale was not the only crop they worked with, it was one of the crops Tamrat introduced to this continent.

From a growing perspective, Ethiopian Kale has some positive attributes.  First, it is a very vigorous, fast growing plant.  We’ve also found it to be resistant to leaf disease and it is less susceptible to pest pressure than other similar greens we grow, especially in the spring when we see a lot of flea beetle pressure in crops such as bok choi, arugula and mustard greens.

1.       Preheat the oven to 350°F.
2.       In a medium, oven-proof skillet, melt 1 Tbsp butter over medium heat.  Once the butter  is melted, add the green onions and green garlic or garlic scapes.  Saute just until the  onions and garlic start to soften.
3.       Add the berbere and 1 tsp salt to the pan.  If you enjoy some heat and spice in your food,  add 2 tsp of berbere.  If you prefer things a little less spicy, start with 1 tsp berbere and  add more to your liking.  Stir to combine the salt and berbere with the vegetables. 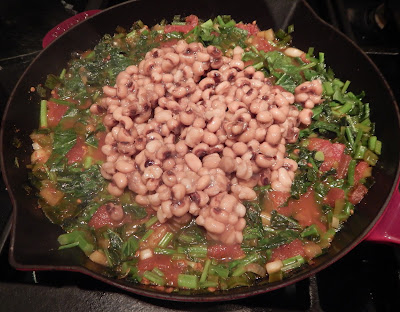 4.       Add the Ethiopian kale to the pan and pour the tomatoes over the top.  Put a lid on the  pan and let the greens steam and wilt down for a few minutes.  Once the greens are  wilted, remove the lid and stir in the black eyed peas.  At this point you should have  enough liquid that the greens and beans are almost at the point of being covered with  the liquid.  If you don’t have this much liquid in the pan, add a little bit of vegetable  broth or water to the pan.  Simmer, uncovered for 10-15 minutes or until nearly all the  liquid has evaporated.  At this point, remove the pan from the burner. 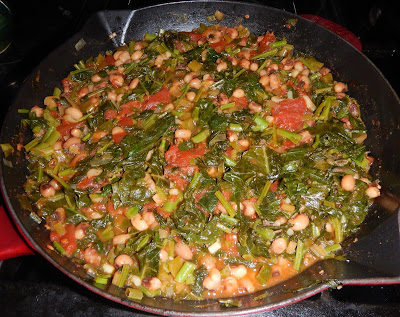 5.       Melt 2 Tbsp of butter.  Mix the melted butter and bread crumbs in a small bowl.  Evenly  spread the bread crumbs on top of the green mixture. 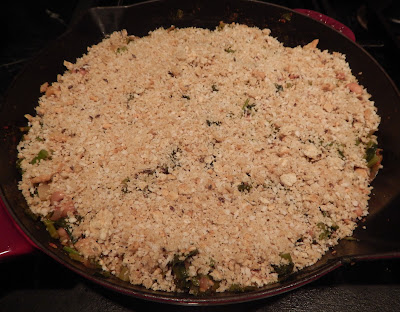 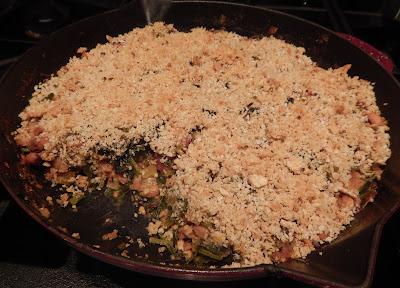 What is Berbere?
Berbere is a traditional chili-spice blend used extensively in Ethiopian cuisine to season meats and vegetables.  It is an interesting blend that leaves you with the spicy heat of the chilies as well as warmth from some of the spices.   Recipes vary from cook to cook, but the mix usually contains hot peppers, black pepper, fenugreek, ginger, cardamom, coriander, cinnamon, and cloves. Other ingredients may include ajwain, cumin, allspice, nutmeg, paprika, onion, or garlic.  I usually find this mix in the bulk section at our local co-op.  The other option is to make it yourself at home.  You can find several different recipes online, but Marcus Samuelsson has one on his website.  Check it out here!

Posted by CSA Coordinator at 6:29 PM