Sweet Potatoes: They're Not Really Potatoes & they're not Yams Either 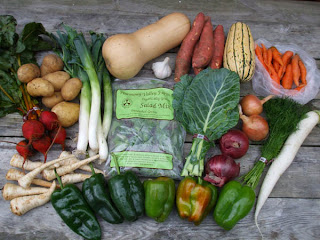 As the first snow of the year falls on the valley this week, our newest vegetable to reach your box is of tropical origin. (Strange!) Sweet potatoes are native to tropical areas of South America and were first cultivated there about 5000 years ago. They like hot, sunny days and warm nights, growing best at an average temperature of about 75°. Even with the great diversity of foods we have learned to grow here in our region, sweet potatoes are a remarkable accomplishment.

Sweet potatoes are traditionally a southern crop, requiring high heat units to produce a sizable/marketable crop. It is not recommended to grow sweet potatoes in Wisconsin – after all, they are a tropical plant! There has never been a commercial sweet potato industry anywhere in the Midwest, and for good reason. Almost all sweet potato varieties have been developed in the south and will not produce sizable tubers in the Midwest. So once again, your contrary farmer, who ignored and defied conventional wisdom (remember when they told me “you can’t make a living growing organic”?) said, “I’ll give it a try!” After several years of experimenting, we found two varieties that would produce sizeable tubers in a normal year, in a special production system. Georgia Jets are the most productive for northern climates but oh are they ugly! Our choice is Beauregard, which does fairly well in the north, but tends to set fewer tubers per plants. They often get very large (think scary 3-5 pound potatoes) in a normal summer, so based on advice from growers we visited in Livingston, CA we went from 12” to 8” spacing in rows to get more modest sized tubers. 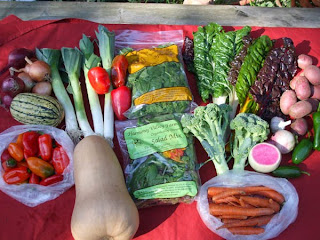 In the sweet potato growing regions of the south, they select planting stock and plant those tubers in outdoor beds of peat moss to grow the “slips” for planting in the field. The “slips” or sweet potato plants are cut off above the original tuber to prevent diseases from the seed tuber from transferring to the new plant. Those slips are planted into the field to produce a crop. The only way we could produce slips of our own would be to store tubers and plant them in a greenhouse, meaning a huge new and expensive greenhouse just for sweet potatoes. So we depend on our southern friends to ship us slips that grow up after they have planted their fields. Our Livingston, CA organic growers are very inconsistent but the new organic growers in Delaware had a very good price. Sadly, they were plagued by wet weather and delivered poor quality plants too late. Thankfully, our friends at Steele Plant Company in Gleason, TN once again came through for us with a second late supply to fill our field.

We plant in late May or early June, just before the heat of summer. We plant the slips 8” apart on a raised bed, covered with dark green plastic to absorb and hold the sun’s heat and mimic the hotter southern soils where sweet potatoes are traditionally grown. 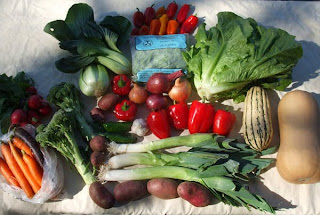 But this year we didn’t have the summer heat they needed and our fear was a low yield of small tubers. I had dug a few potatoes out around the edges and thought there was just not much there. I even told the harvest party tours that they should not expect to find much, but when we dug a couple dozen plants, we found some very nice sweet potatoes. Not jumbos, but nice size and shape!
I started to think more positively about the whole crop, but only digging them would tell the whole story. When the weather forecast called for a week of freezing nights, we knew it was time to get them out of the ground, since they are very sensitive to any temperature approaching freezing.

So on Wednesday of last week, we tackled the 1+ acre field with all the crew we could manage to spare from other harvests and set a must do goal of all out of the ground before the freezing forecast for Friday night. Angel & Nestor started mowing vines and leaves, then cutting the stems off from the vines, using their own homemade invention of a vine lifter stick to lift the vine and cut it off without cutting the largest sweet potatoes that stick up out of the ground.
A crew of 7 or more followed, walking behind the digger, gently pulling the banana like clumps off the digger and onto the bed so they did not get buried in muddy clods of dirt. Oh, did I mention that it rained every day? Not too much though, and we continued non-stop until Friday at 4pm, when all the sweet potatoes went into the greenhouse to begin the curing process.
Sweet potatoes come from the field at only 4 or 5 brix, which translates roughly to that percentage of sugar. The 5-6 day cure at high humidity and 85° F temperature will double the sugar content to 10-12%. Now that is a sweet potato that tastes good and sweet without adding anything!

So dig samples as you will, but it is the actual field dig that shows you what you really have for the season. I was nervous and I felt foolish, a grown man who has raised sweet potatoes for 20 years, and yet the morning of the dig I could not wait to see them come up and over the digger. I walked the first four beds with Lucio, grabbing banana shaped bunches and gently tossing them on top of the moist earth. After those four beds, I was ready to leave catching them to younger hands. I hauled loads home and stacked the pallets close and high for curing.

The final estimate: 23,000 pounds of sweet potatoes! Just over the national average yield, and not bad at all for a heat loving crop during a record cool summer. 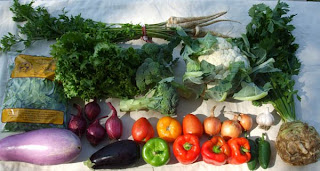 that are white, and also a bit starchier and less sweet. This is a shame, because it is the bright orange color that makes sweet potatoes such a nutrient-dense vegetable. In a 1992 study that compared fiber content, complex carbohydrates, protein, vitamins A and C, calcium, and iron, the Center for Science in the Public Interest ranked the sweet potato as the most nutritious vegetable.

The possible preparations for sweet potato are as diverse as the cultures that eat it. As a moist, firm starch with smooth texture, it lends itself to both dry heat and moist heat cooking methods- basically, nearly anything you can dream up. Some of the most popular preparations for sweet potato are baking, frying, and mashing. For some, it may take a small leap to get past sweetened dishes that involve sweet potatoes doused in butter, brown sugar, and marshmallows. To start out, you can substitute sweet potato for nearly any dish you’d otherwise use potato, and in doing so you reap the benefits of all the extra vitamins. Sweet potato also lends a rich flavor to savory preparations and pairs well with cheese, garlic, herbs such as rosemary, and spicy or smoky flavors. They can be cooked either peeled or with the skin left on. Although sweet potato skins are considered edible, the skins can sometimes be tough or fibrous depending on the plant. Try it to see if you like it.

Tropical as they are, sweet potatoes do not like to be cold. Refrigerating them will damage the flavor and texture. They are best stored in a cooler spot in the kitchen, well ventilated, not wrapped in plastic. A hanging basket is great if you have one. If you choose not to eat them right away (but why wouldn’t you want to?), they should keep for up to two or three weeks as long as they don’t become overly dry. Do keep an eye on them to watch for moisture loss or mold.

Try this recipe!
Sweet Potatoes in Curried Coconut Sauce over Kale
From Vegetables from Amaranth to Zucchini by Elizabeth Schneider

1. Peel sweet potatoes and cut into ¾” dice. Chop enough celery/ celeriac to make ½ cup. Stem chili, seed, devein, and mince.
2. Combine chilis, water, salt, curry, ginger, and garlic in a pot and bring to a boil. Add sweet potatoes and celery and simmer, covered, until tender, about 15 minutes. Uncover and simmer to thicken sauce somewhat, about 5 minutes. Add ¼ cup coconut milk and cook at a bare simmer about 5 minutes to blend flavors. Taste and add more coconut milk to taste.
3. Meanwhile, strip off and discard kale stems. Thin-slice leaves. Set on a steamer rack over boiling water. Cover and cook until tender, 5 to 10 minutes.
4. Arrange kale on a serving plate and spoon the sweet potatoes over. Serve hot, garnished with lime.

Serves 4 as a main dish. Serving with cracked wheat, millet, or quinoa is suggested.
Posted by terri k at 4:48 PM 1 comment: 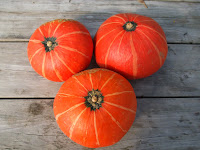 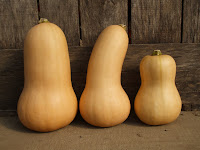 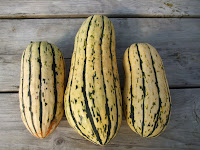 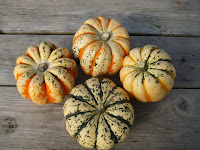 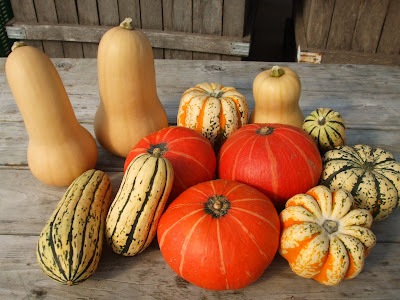 Check out this week's super informative newsletter, all about Winter Squash.
Posted by terri k at 10:57 AM No comments: