This week's CSA newsletter features highlights and recommendations from the recently released "Presidential Cancer Panel" report.  You can check out the report in it's entirety online.


Here's one recommendation direct from your government's advisers, believe it or not!  While it doesn't specifically endorse organics, it gets pretty darn close - which is causing quite the uproar in the
Big/Industrial/Conventional Ag community.

From the report:
"Exposure to pesticides can be decreased by choosing, to the extent possible, food grown without pesticides or chemical fertilizers and washing conventionally grown produce to remove residues.  Similarly, exposure to antibiotics, growth hormones, and toxic run-off from livestock feed lots can be minimized by eating free-range meat raised without these medications if it is available." 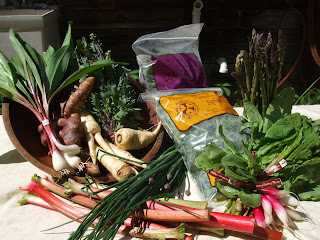 Speaking of the CSA, we are packing the 4th box of the season as I write.  We've made it through this first month & have sent out some really beautiful boxes.  The deliveries have gone really well, really smooth so far this year - only a dozen or so calls/emails from people who had no idea where to go or what to do to get their boxes or when they would have a delivery. 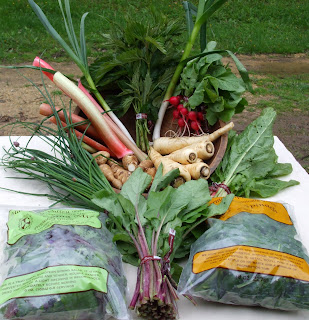 With such a large CSA, those calls can be very tiresome. So we are recruiting "good" CSA members & "training" them on how to have a great season.  We at the farm are scheduling the deliveries correctly and disseminating the information the people need to have a successful CSA experience.

Thankfully, I've had far more fan letters come in this year than complaints or confusion.  Chef Katie's recipes are pretty popular and people are letting us know!  Happily, we have adventurous souls who give everything in the box a try, even things they've never heard of before like sunchokes, nettles or salad burnet.  It's also good to hear about people giving things another try.  You don't know how many times I've heard tell of an aversion to radishes until someone decided to try ours! 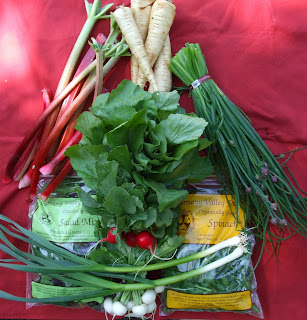 Our CSA delivery drivers (Jerry, Andy & Matt in MN, Jeroen & Rachel locally, José Manuel & Rogelio in Madtown)  are doing an amazing job getting the boxes to the right places.
Out in the field, we're getting ready for strawberries!  I've picked a couple pints this week from the north end of the Early Glow beds. Don't worry, we'll still have plenty for you on Strawberry Day (June 20). 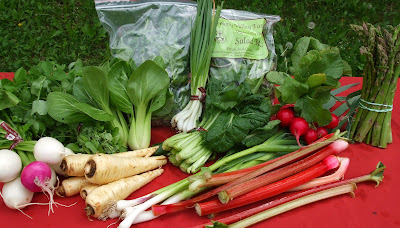 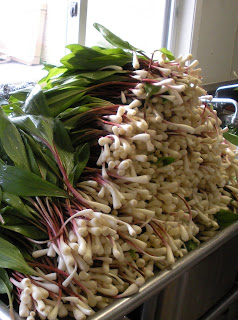 As the ramp season is winding down, we all can't wait to bite into our first piece of ramp cheese. Andrea and I spent about 7 hours processing 200 pounds of ramps this last week. We sent the ramps off to Otter Creek Organic Dairy to be made into cheese. We first cut the roots off and then blanched and shocked them. We next took turns chopping the ramps and then pureeing them with a touch of oil. Even though we were very happy to see the last batch being pureed, we both agreed that the wonderful ramps still smelled and tasted as good as ever. 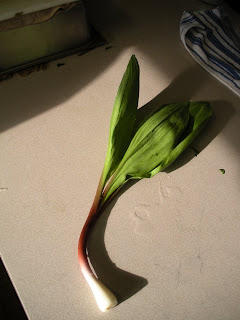 Never Leave A Ramp Behind!
Andrea with the ramps 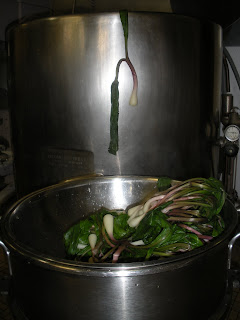 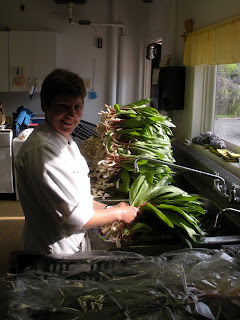 Posted by Katie Routh at 5:27 PM No comments: