What a lovely day, sunny and reasonable warm for the next to last day in April. I finished the menu for next week so want to post it. We had 12 more workers start today so beginning Monday we will have 45 for lunch.

The last week in April now onto May flowers.
The menu for this week is:

Have a great week-end and eat healthy and deliciously.
Posted by Chef Bonita at 12:08 PM 3 comments:


What a week. Snow is not entirely new to April but I was not ready to slip slide down the pathway to the barn carrying hot food for the crew. We are feeding them in the upstairs of the barn until the weather allows us to be outdoors again. Happily, I didn't fall or lose any casseroles and I thank Kelly and Tom for helping me carry everything. Life would be so boring if everything went according to plans.


Next week my menu will include: sorrel, chives, parsnips, ramps, and spinach. I will try and get it posted tomorrow.


Today I gave the crew, Curry Pork Ragout over Brown Rice and Sherry roasted root vegetables. No leftovers, not even in the compost bucket. Now that's what I call a good day.


See you tomorrow.
Posted by Chef Bonita at 2:56 PM No comments: 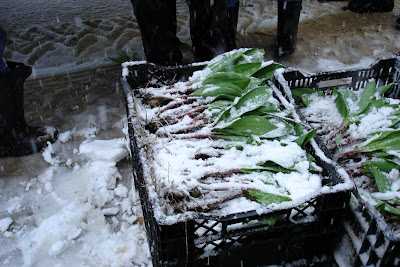 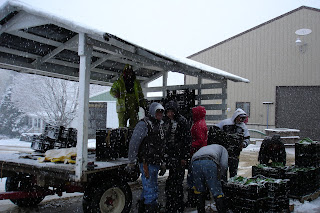 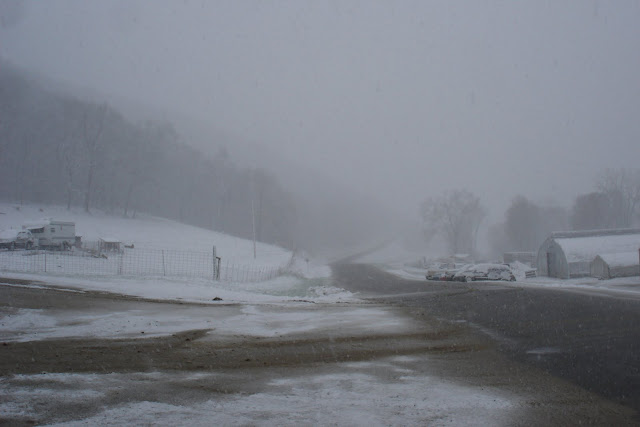 It's still snowing!  We had to give up the field work today - the crew could no longer find the ramps on the hillside because the snow was getting so deep.

It's kind of a rude welcome to our crew from Mexico, but they are taking it in stride.  They are just like my dad (in AR), rubbing it in - "At home, it's hot & sunny and I'm in my shirtsleeves"

Like Michael said, as long as I don't have to shovel my driveway!  We are just tired of it - this winter wonderland is not as pretty in April as it is in December.  We got some onions transplanted into the field yesterday, but we're not sure when we'll get out again - this week's forecast does not look good for getting out while it's dry.  We'll have a new spring update newsletter posted soon, with updates on everything that has been going on!  Drive safe and stay warm-
Posted by terri k at 6:10 PM No comments: 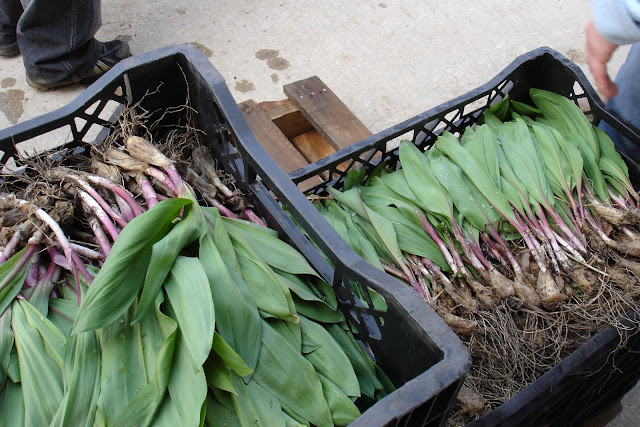 We harvested the first of the ramps last week for Farmer's Market!  Richard had a busy Saturday, despite the rain and chill. 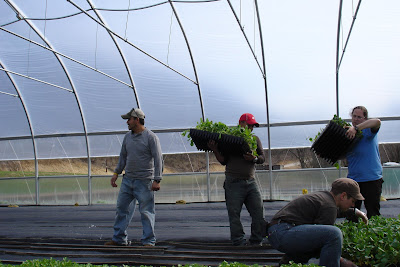 Our first group of Mexican H2A visa workers made it "home" to Wisconsin early on Sunday!  It's so good to see and hear them again.  Lots of Spanish language on our 2-way radios, lots of chatter in the greenhouses and hopefully lots of smiles, songs and whistling at the end of the day.  And of course, 17 heartfelt hugs from me this morning.  What a way to start the day. 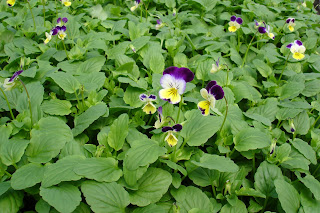 Irma and Nina are busy transplanting our edible violas in the flower tunnel.  The nasturtiums are sprouting from the dirt, but we'll need the violas in the meantime.  Look for them in your first bags of HVF salad mix. 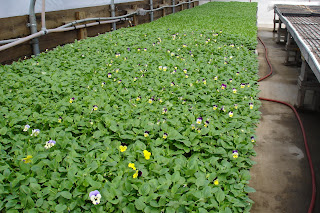 I had a wonderful weekend in Minneapolis, where I attended the Seward CSA Fair.  It was amazing to see the number of people looking for a farm, asking great questions about our CSA & our farming practices, and building community.  I had the help of six dedicated CSA members, extolling our virtues as well.  Their enthusiasm is what convinced most of the people checking out the farm!  Thank you!

You have to take the good with the bad here on the farm, and sadly today we had our first baby goat casualty.  She was a newborn this weekend, and just didn't make it.  We had another live birth today though, we'll see if he makes it through the week.  We'll keep you posted.
Posted by terri k at 4:49 PM 1 comment: 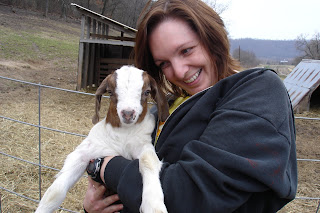 Who is cuter?  Kelly the Bookkeeper or the funny kid?
Posted by terri k at 1:53 PM 1 comment:

I arrived at Harmony Valley Farm just one week ago and already I have been pleasantly involved in the Farm. I will be cooking lunch for the busy farm crew. I awake each morning to the roosters crowing and the baby kids bleating for their Moms. I look out my window and can't help but smile as the baby goats scamper up, over and around their Moms. Monday will be day one for crew lunch and I am serving Goulash, Spinach salad, and Garlic biscuits. The rest of the week goes like this: Tues.- Spicy Black Bean Chili with Pork, Cornbread Muffins, and Applesauce; Wed.-Stuffed Peppers, Mashed Parsnips and Turnips, Pickled onions, Date Cookie Bars; Thurs.-Rhubarb Lentil soup, Vegetable Foccacia, Fresh fruit; and Fri.-Oxtail Stew, Brown Rice, Roasted Root Vegetables, Chocolate Chip Cookies. I will have to let you know how the crew responds to the menu.
Posted by Chef Bonita at 1:29 PM 3 comments:

The Miracle of Birth 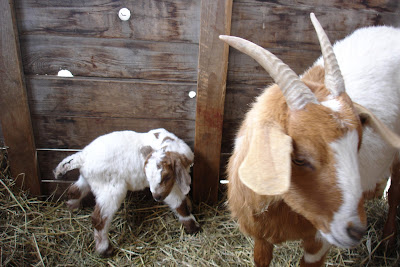 This morning as I was taking the mail to the mailbox, I heard some noisy goats.  They are very vocal when they are hungry, so I thought that was it - Brandon, our animal guy, had some cow trouble at home so he hadn't done those chores this morning.   So I got a bucket of grain and took it out to the trough when I saw this mama on the ground, evidently in distress, with baby goat parts just barely coming out of her hoohah.  Yuck.  She was the one making all the racket.  Cripes - I don't know nothin' about birthin' no babies! As I was planning to run up to the house and get Richard, and hoping I wouldn't see him driving off down the road to the sunchoke harvest, he showed up at the fence and said "What is all that yelling about?"  I said, "She's giving birth right now and I think she's having trouble!".  "Doesn't sound like it's going well.  I'll be right down." 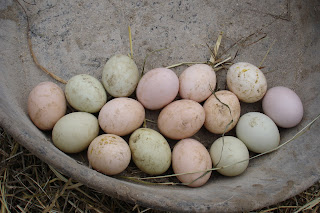 Richard slowly walked over to mama and asked me to give him a hand. OMG no, I'll give you some moral support, I've got your back about 8 feet over here.  So he reaches in and we encourage her to keep pushing.  Richard said it looked like one of the feet was stuck, but once he cleared away some of the goo I could see a little nose and mouth sticking out and breathing.  Whew.  We didn't know how long she had been in distress, so it was good to see the baby was still alive.  Mama gave a push and the baby slid out and started wiggling and sneezing.  Mama was in shock, with her head way over on the other side, out of reach of the baby.  But she soon stood up and went straight over to the grain, leaving her baby!  Duh, you have to clean him off and get him to suckle right away!  So Richard went over to the trough and got mama by the horns to muscle her over to the "maternity pen".  He asked me to pick up the very gooey baby - I asked him "Eeeew!  How?  By the belly in the middle or what?"  "Aw, he's just a little slimy - get under the front and back legs".  I'm thinking, I don't have any emergency pants or shirts here anymore, it'll be a mess, eeeew.  Long story long, I was off the hook and let Richard do the dirty work of getting mama penned and then picking up the baby to bring him over to her, cooing "you have a baby, here you go" and gently putting him in the pen.  I checked on them later and it looks like baby number 5 is doing well! (I gave her some grain and water, so I'm not completely useless) 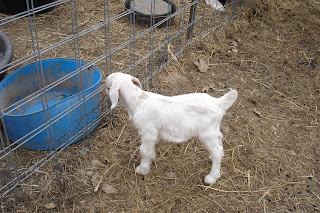 This is baby boy number 4, the curious cat.  He is always sniffing around and escaping, exploring the great big world, kicking up his heels.  Making mama worry, of course.

In other farm happenings, things are growing!  The large greenhouse is full to the brim with various onions, kohlrabi, parsley, fennel and more! 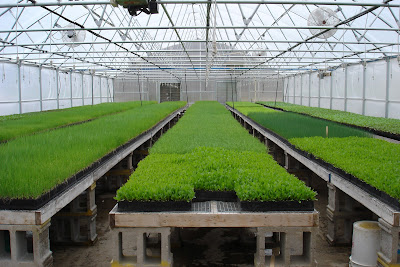 In the nursery greenhouse, the celeriac continues to thrive and get transplanted and the  lemongrass is greening up.  Guess what? We're going to grow ginger this year!  We just got a box of bulbs and will start sprouting that soon. Hopefully a successful experiment, here in Wisconsin.

Outside, I can still smell the spring onions and garlic growing and we had a dry enough time to get out to the sunchoke field and harvest!