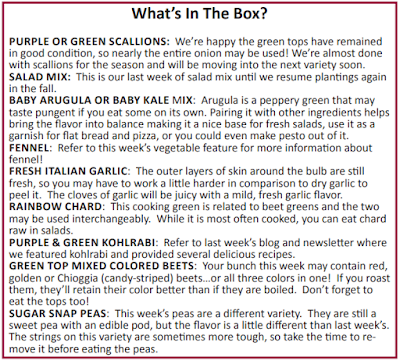 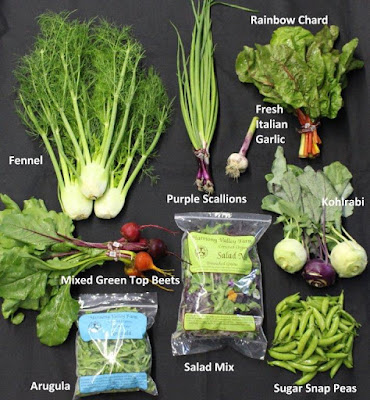 Cooking with This Week’s Box!

“Great cooking is about being inspired by the simple things around you — fresh markets, various spices. It doesn’t necessarily have to look fancy.” – G. Garvin

Despite the fact that summer made its official entrance last week, it has been a bit on the chilly side!  I thought we’d get hit with a wave of cucumbers and zucchini for this week’s box, but these crops need heat to produce and it just hasn’t been warm enough.  So, we’ll set aside all the cucumber recipes I’ve been looking forward to and we’ll focus on some other delicious recipes this week!

This is our last week for salad mix until we resume planting in the fall.  With the pretty little beets in your box this week, I think a beet salad is in order.  Here’s a recipe for a Beet Salad with Goat Cheese and Candied Walnuts.  The bunches of beets this week include a variety of colors.  If you’d like to keep the color in each variety, cook them separately or roast them.  If you cook the golden and Chioggia beets with the red ones, they’ll all turn red.  This is a great salad to serve alongside the Pizza with Spring Onions and Fennel recipe featured in this week’s newsletter.  You could even chop up some of the fennel fronds and add it to the salad if you like.  Otherwise, save the fronds to make Blended Lemonade with Ginger and Fennel!

Make sure you save the greens from your beets!  Beet greens are packed with nutrition and can be added to a green smoothie in the morning, lightly sautéed or eaten raw.  Beets and Swiss chard are in the same family and you can actually use these two greens interchangeably.  If you combine the beet greens and the bunch of Swiss chard in this week’s box, you can make this Chard Gratin recipe featured at Food52. If you’d like to turn this into a main dish, add a layer of cooked cannellini beans on the bottom of the gratin.

I’m feeling like stir-fry this week.  Several weeks ago I was reminded about this recipe for Pork & Kohlrabi Stir-Fry that I created for our June 2013 newsletter. If you make extra rice to serve with the stir-fry, you can use the leftovers to make this recipe for Fried Rice with Ham, Egg and Scallions. This recipe was highlighted by one of our CSA members who shared it with our Facebook group. This recipe calls for frozen peas, but you can certainly use the sugar snap peas in this week’s box instead!  You should still have some sugar snap peas remaining for another use, unless you are like me and eat half the bag raw as a snack!  Sugar snap peas actually make a handy afternoon snack for adults and kids alike.

And last but not least, lets find a good use for the baby arugula.  In this week’s fruit share newsletter we mentioned a recipe for Grape, Avocado and Arugula Salad.  If this doesn’t intrigue you there is also a recipe for Arugula Salad with Parmesan, Lemon & Olive Oil featured on the same blog.  Either salad would go nicely with a lightly breaded chicken breast or pork chop--and a glass of white wine for dinner.

Ok, that’s a wrap.  I’ll see you back next week for more delicious eating out of the box!—Chef Andrea 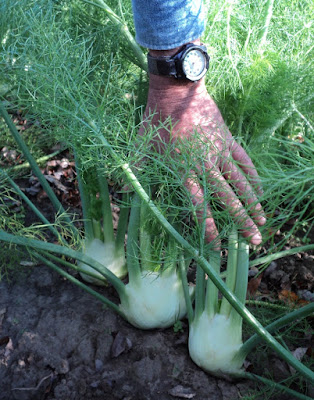 Fennel is a unique vegetable easily identified by its feathery tops and distinct aroma.  It has the flavor of anise, or mild licorice, which some people love and others are still learning to like.  If you are in the latter group, please keep an open mind and read on.  Nearly all of the fennel plant is edible and is comprised of three main parts.  The white bulb at the base of the plant is the most commonly used part.  The soft, fine, feathery green portion extending off the stalks is called “fronds.” The fronds are also edible and can be used more as an herb, seasoning or garnish to add a bit of flavor to soups, salads, etc.  The stalks are sometimes too fibrous to eat, however they have a lot of flavor and can be used to make vegetable stock or a soothing tea. 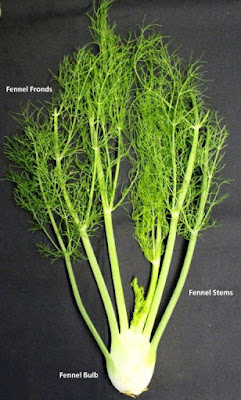 Fennel has a wide variety of uses and may be found in recipes from a variety of culinary backgrounds.  It’s often used in Italian cuisine, can be found in classical French food, but also finds its way into cuisine from different parts of Asia.  I recently came across a recipe for Indian Spiced Fennel Pickles that I’m anxious to try.  Fennel may be used in gratins, cream soups, seafood dishes, simple salads and antipasto platters.  It pairs well with a whole host of other foods including lemons, oranges, apples, honey, white wine, olives, olive oil, beets, carrots, celery, tomatoes, potatoes, fish, seafood, pork, cured meats, white beans, cream, Parmesan cheese, feta cheese, cucumbers, dill and parsley.

Fennel should be stored in the refrigerator, loosely wrapped in plastic. When you are ready to use it, you may need to peel off the outer layer of the bulb to wash away dirt that may be between the outermost layers.  The outer layer is still usable after it is washed.  Cut the bulb in half and make a V-shaped cut into the core at the base of the fennel bulb.  Remove most of the core, then slice thinly or cut as desired. The bulb is crisp, sweet and can be eaten raw or cooked.  If you enjoy the fresh anise flavor of fennel, you will likely enjoy eating fennel in salads and other raw or lightly cooked preparations.  One important thing to remember is to slice fennel as thinly as you can.  It makes for a more balanced eating experience.

If you are in the group of people who just really don’t care for the flavor of licorice and are hesitant to embrace this vegetable, I’d encourage you to incorporate fennel into a cooked preparation.  When sautéed, roasted or otherwise cooked, the oils in fennel that give it the distinct flavor volatilize which lessens the intensity of the flavor and develops the natural sugars.  The Pasta with Roasted Fennel Tomato Sauce featured this week may be a dish you’ll enjoy.  There are also two other recipes we’ve featured in previous newsletters that have received the seal of approval from other CSA members who were hesitant to try fennel.  However, they tried these recipes and actually really enjoyed them!  The two recipes I’m referring to are Caramelized Fennel & Beet Pizza featured in our June 2016 newsletter and Pasta with Golden Fennel from our July 2013 newsletter.

Fennel is a good source of calcium, iron, magnesium, zinc, and vitamins C & A.  The volatile oil that gives it the distinct flavor and aroma is called anethole.  It has been shown to reduce inflammation and help prevent some cancers.  As an added bonus, it is also a natural digestive and breath freshener!

1.     Preheat the oven to 450°F.  Combine the fennel, onion, garlic, oil, chili flakes, fennel seeds, salt,  and pepper in a roasting dish and roast for 15 minutes, tossing once or twice during cooking.
2.     In the meantime, bring a pot of salty water to boil and cook the pasta until al dente.  Reserve  some pasta cooking water.
3.     After 15 minutes of roasting, stir in the crushed tomatoes, combining well.  Roast 5 to 10 minutes more, until the fennel is tender and starting to brown.
4.     Drain the pasta and toss with the roasted vegetables and Parmesan, adding some pasta cooking  water if necessary until the sauce is loosened and coats the pasta.  Serve immediately.

This recipe & photos were featured at seriouseats.com and commented on by Blake Royer.  He introduces the recipe with the following commentary: “Due to unhappy experiences with licorice at Grandmother’s as a child, I’ve long been an anisephobic eater.  ….for a long time, even foods that vaguely tasted of the stuff (like tarragon and fennel) sent me running.  That all changed when I tasted roasted fennel.  It’s remarkable stuff.” 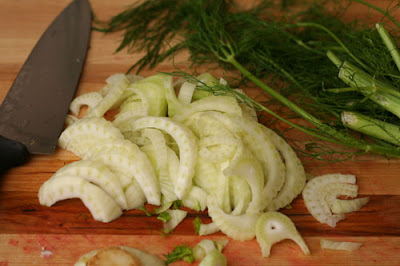 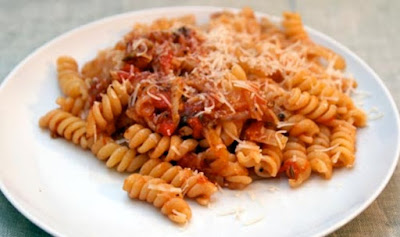 1.     Preheat the oven to 450°F, preferably with a baking stone in it.  Heat 1 tablespoon of the olive oil over medium heat in a large, heavy skillet, and add the onion and about ½ tsp salt.  Cook, stirring often, until the onion is tender, about five minutes.  Add the fennel and garlic, and stir together.  Cook, stirring often, until the fennel begins to soften, about five minutes.  Turn the heat to low, cover and cook gently, stirring often, until the fennel is very tender and sweet and just beginning to color, about 15 minutes.  Season to taste with salt and pepper.  Stir in the chopped fennel fronds, and remove from the heat.
2.     Roll or press out the pizza dough and line a 12 to 14 inch pan.  Brush the pizza crust with the remaining tablespoon of olive oil and sprinkle on the Parmesan.  Spread the fennel mixture over the crust in an even layer.  Place on top of the pizza stone, and bake for 15 to 20 minutes, until the edges of the crust are brown and the topping is beginning to brown.  Remove from the heat.  Serve hot, warm or room temperature. 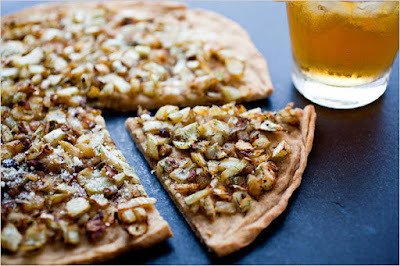