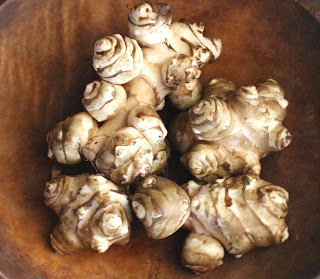 I admit, I didn’t have a clue what a sunchoke was when I first started cooking at Harmony Valley Farm.  I only knew I was hungry for the exploration of new vegetables and embraced the challenge of cooking with the seasons.  Within the first few weeks I was here, I made a delicious sunchoke chive soup and crispy roasted sunchokes with chili & lime that I served for crew lunch (both recipes are on our website).  It didn’t take long for Richard to pull me aside and gently request that I lay off on the sunchokes for crew lunches.  That’s when he explained the beauty of a sunchoke to me.  Some people love them and others are not quite as fond of them for reasons I’ll explain in just a bit.  But first, let’s explore the basic of sunchokes.

Sunchokes are a tuber that grows underground on a plant in the sunflower family.  They are native to North America and were actually an important food for our early ancestors who called them sun roots.  In fact the Effigy Mound Builders who lived on our land 1500 years ago grew and ate sunchokes!  The other name they are most commonly known by is Jerusalem Artichoke.  This is a bit misleading as sunchokes don’t have anything to do with Jerusalem or globe artichokes!

Richard started growing sunchokes in his quest to grow as many seasonal vegetables as possible in a Wisconsin growing season.  Sunchokes help us push the limits on our season both as a late fall harvested crop as well as a spring-dug crop.   The stalks of the plant grow to an impressive 10-12 feet tall and when in bloom with yellow sunflowers, the field is a work of art.  Most varieties of sunchokes don’t even start developing much for tubers until after the first frost in late fall.  After the first frost they are able to translocate the energy stored in the stalk to the base of the plant for the purpose of developing the tubers.  Sunchokes are cold hardy and, as long as the ground isn’t frozen, can be harvested very late into the fall.  In fact, last year we did our final harvest in December!  Sunchokes are one of a handful of crops we are able to overwinter in the ground and harvest in the spring.   In fact they continue to grow slowly and are actually larger in the spring.  Sunchokes also store very well throughout the winter which is just one more reason why sunchokes are a good fit for a seasonal Midwestern locavore’s diet.

Sunchokes are a tasty vegetable with a crisp, crunchy texture and a thin skin.  They have a mild, pleasant, slightly sweet and nutty flavor.  They can be eaten raw or cooked, and peeling is a matter of choice.  When cooked, keep in mind that anything you can do with a potato you can do with a sunchoke.  Sunchokes make excellent smooth soups and are delicious when roasted.  Because of their high water content, roasting makes them fluffy on the inside and crisp on the outside.  Sunchokes can also be stir-fried, pan-fried, added to stews and eaten raw in salads.

Sunchokes are really a pretty cool vegetable that are quite tasty.  Now, here’s where I need to interject an important point.  Sunchokes contain a non-digestible fiber called inulin.  Some people may experience abdominal discomfort, gas and bloating if they eat too many sunchokes at a time.  There are some individuals who have a bad impression of sunchokes because no one ever told them that they may be best consumed in small quantities.  As a result they may have eaten too much and experienced some digestive discomfort that they have not yet forgotten.  In fact, Richard and I have our own sunchoke stories that led us to form a pact upon which we agreed that despite the fact that we grow them, we never have to feel obligated to eat sunchokes.  Within the last year I’ve noticed their popularity amongst chefs really opening up.  I started to think maybe I was missing out on something by choosing not to eat sunchokes.  So, after many years of not eating them, I cooked them again and realized how much I really do like their taste!  I also did a little more research about inulin and realized I am missing out on some important health benefits by choosing to exclude sunchokes from my diet.

Ok, so lets talk a little bit about inulin and why it’s good for our bodies.  Inulin is a non-digestible fiber known as a prebiotic nutrient.  Many of you are probably familiar with probiotics which are beneficial bacteria that live in our digestive tract and contribute in positive ways to our health and well-being.  Probiotic bacteria are found in fermented foods such as sauerkraut, yogurt, kefir, etc.  They help maintain good digestive health by keeping our digestive bacterial populations in check and preventing the overgrowth of bad bacteria that can make us ill and inhibit proper digestion.  Probiotic bacteria do many other amazing things for our body, so don’t be misled by this very simple explanation of their function.  Prebiotics, such as inulin, actually serve as an important food source for probiotic bacteria with most of their work taking place in our large intestines.  Essentially, prebiotics are fertilizer for beneficial bacteria in our gut.  There are many benefits that stem from the synergistic effects of consuming prebiotics and supporting healthy bacterial populations throughout the digestive tract.  Some of the benefits include improved nutrient absorption, enhanced immunity, and better digestion which is important as a basis for our overall health and well-being.  The bacteria in our large intestines in particular use inulin as a food source which helps them thrive and keep healthy populations.  Unfortunately the good bacteria produce gas as a product of their digestion and that is where we have the potential to develop symptoms of gas and bloating if we eat too many at one time.

So after learning more about the health benefits of sunchokes, I decided to change my tune and figure out what an appropriate serving size is for my body.  I’ve learned that I can comfortably consume about a ¼ cup portion.  So that led me to rethink how I’m using sunchokes in my cooking.  For those of us who need to consume them in smaller quantities, we have to find ways to eat them more like a condiment instead of the main ingredient.  By approaching sunchokes this way, we get to enjoy the taste of the sunchoke as well as their health benefits without experiencing any discomfort.  The good news is that sunchokes do store very well, so if it takes you a month or two to eat a pound of sunchokes it’s no big deal. 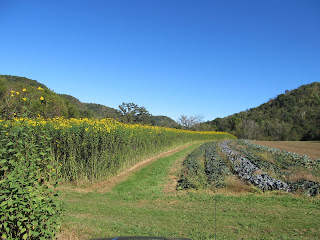 Here are a few ideas to get you started.  First, check out the recipe for Chile & Lime Sunchoke Salsa in this week’s newsletter.  It’s super-simple to make and very tasty.  It can be eaten in small quantities as a condiment to top off tacos, seared fish, chicken and pork, or added to salads or sandwiches in quantities of just 1-2 tablespoons at a time.  Here’s another idea, the next time you are cooking a burger, add a few slices of thinly sliced sunchokes to the pan and fry them until golden and slightly crispy and add them to your sandwich.   One of my favorite ways to eat sunchokes is by simply roasting them.  A portion of roasted sunchokes may not be a good idea, but why not mix them in with other root vegetables such as carrots, parsnips and potatoes?  You can spin-off on the idea of roasted vegetables by making sunchoke croutons to eat on a green salad.  Cut the sunchokes into small cubes, toss with olive oil and season to your liking with salt, pepper and maybe a few pinches of smoked paprika or garlic powder.  Roast until golden and crispy.  You can also shred sunchokes and mix them with potatoes or sweet potatoes to make potato pancakes or hash browns.  I mentioned earlier that you can stir-fry sunchokes as well.  If you add a small handful to a stir-fry near the end of cooking, they’ll retain their crispiness and will taste similar to a water chestnut.  Lastly, add diced or shredded sunchokes to quiche, frittatas or egg casseroles.

For those of you who may be trying sunchokes for the first time, I hope you enjoy your first taste of them and find simple ways to include them in your meals.  If you have tried sunchokes previously and (like me) have been avoiding them, I hope you’ll reconsider ways you might include sunchokes in your diet again.  And as a side note…..Farmer Richard has also reconsidered his avoidance of sunchokes and has willingly been eating and enjoying sunchokes again with no negative recourse. 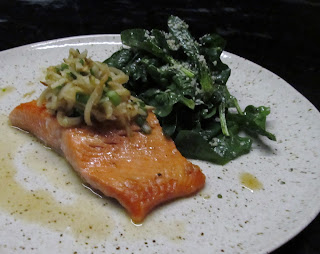 Serving Suggestions for Chile & Lime Sunchoke Salsa:
Posted by CSA Coordinator at 9:38 AM