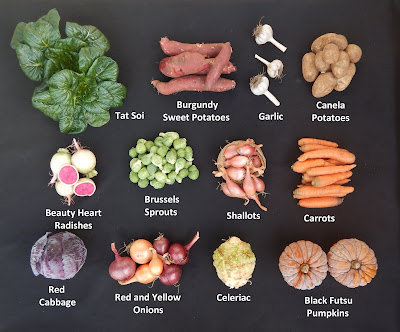 Did you notice the unique little pumpkins in this week’s box?  It’s the Black Futsu!  I’ve been looking forward to this vegetable all season long.  It’s a new one for HVF and I think it might have earned a place in next year’s line up as well!  I have two Black Futsu recipes to share with you this week.  The first recipe is Creamy Cider & Black Futsu Pumpkin Soup (see below).  This is a simple recipe to make, but you do need to give yourself time to caramelize the onions and bake the black futsu pumpkin in advance.  Once those two things are accomplished the rest of the soup comes together very quickly.  It’s delicious served on its own, but I chose to serve it with wild rice and toasted pumpkin seeds as a main dish.  This soup would also be lovely to serve as a starter for Thanksgiving dinner, or serve it after Thanksgiving along with a turkey sandwich.  The second recipe is for Maple-Sage Roasted Black Futsu Pumpkin (see below)  This is another simple recipe that just requires a little patience to allow time to roast the black futsu pumpkin wedges until they are golden, sweet and crispy around the edges.  With this recipe, you do eat the skin which is part of the overall effect.  Once the pumpkin is nearly roasted to completion, brush it with a mixture of maple syrup, apple cider vinegar and whole grain mustard.  After this you put it back in the oven for 7-10 minutes.  When you pull them out, the wedges will have a light glaze on them that seemingly transforms them into something so delicious it’s hard to stop popping them in your mouth!

We’re happy to have enough Brussels sprouts to send them to you one more week.  It seems everywhere I looked the past few weeks I was seeing recipes for Brussels sprouts paired with sweet potatoes!  Here are two of my favorites that stood out, both from www.wellplated.com.  The first is Sweet Potato Pasta with Brussels Sprouts.  This is a one pan pasta dinner, quick and easy enough for a weeknight vegetarian main dish yet classy enough to incorporate into holiday celebrations.  It’s topped with crumbled feta, dried cranberries and sage.  The other recipe is for Sheet Pan Chicken with Sweet Potatoes, Apples and Brussels Sprouts.   Everything gets roasted on a sheet pan, seasoned with a touch of rosemary.

The next two recipes for tat soi were shared by members in our Facebook Group, and they look delicious!   Tatsoi Saag Paneer is a classic Indian dish typically made with spinach, but this version uses tat soi instead.  This recipe is also made with tofu instead of the traditional paneer cheese, so it’s vegan.  Serve this with naan bread or rice.  The other recipe is for Sweet Potato and Tatsoi Soup.  Several members made this recipe and it seems to be a winner.  It calls for celery, but you could substitute celeriac in this week’s box.

I love making crunchy vegetable slaws during the winter and am anxious to try this Winter Slaw that uses red and/or green savoy cabbage along with apples to make a tasty slaw topped with Parmesan cheese, dried cranberries and toasted pumpkin seeds.  The recipe calls for 1/3 cup of pumpkin seeds, which is about the amount you’ll get if you save them from 2 (medium) Black Futsu pumpkins.  Don’t throw those seeds away, put them to use!

If you’re looking for a classy vegetarian dish for Thanksgiving, consider this Savory Potato Tart with Celeriac & Porcini.  If you don’t have porcini mushrooms, substitute another dried mushroom of your choosing.  While we’re talking mushrooms I thought I’d share this recipe for French Onion Stuffed Mushrooms.  This recipe would make a great appetizer and is a good way to use up onions if you have a pile building up in your pantry!

With Thanksgiving coming up, I couldn’t resist adding shallots to this week’s box.  A special holiday requires a special onion. No shallots are not just another onion, although they are in the same family.  Balsamic Roasted Shallots is a classy vegetable side dish that will go nicely with Thanksgiving dinner.  Or you could always make this decadent Caramelized Shallot Gravy!

I’ve had these two recipes for homemade tater tots in the cue for several months, waiting for the canela russets.  Tater tots take me back to my childhood and I never considered making them myself.  The first recipe for homemade Fried Tater Tots is most like the Ore Ida tater tots I remember from my childhood.  These are formed into the traditional tot shape and then fried in oil on the stove top.  The other recipe is for Baked Tater Tots that are made in mini muffin tins.  With this recipe you get all the flavors of tater tots, including the crispy exterior, but in a little lighter version.

Beauty heart radishes, also referred to by some as “watermelon radishes” are a flashy vegetable to brighten up our winter meals.  If you don’t know what to do with them, you might want to start by reading this article:  Watermelon Radish... What Do I do With it?  This Watermelon Radish, Orange and Goat Cheese Salad is also a showstopper, or you could always keep it simple with these Roasted Watermelon Radishes.

Red Cabbage Vegetable Quinoa Stew just might win the prize for “Recipe containing the most items in this week’s box!”  I think you could incorporate up to seven of this week’s vegetables in this recipe alone!  Since this is such a healthy stew, you could balance off this meal with dessert.  What might that be?  Carrot Cake Cheesecake!

Well friends, we have reached the bottom of the box.   I hope you have a nourishing, relaxing Thanksgiving holiday and are able to take a little time to reflect on the many things you are grateful for in this year.  I will see you back here in December for our final two boxes of the season.  Happy Thanksgiving!—Chef Andrea 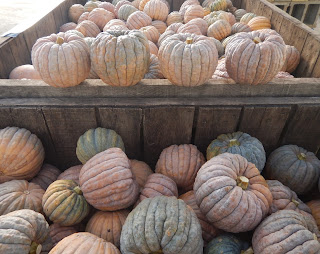 This week I’m excited to introduce you to the beautiful, unique Black Futsu Pumpkin!  This is a heirloom Japanese squash variety that caught my attention in the High Mowing Seed catalog last winter.  What was this odd looking pumpkin shaped vegetable with skin that was a grayish, charcoal color mixed with tan?  After a little research indicating it has good flavor and is revered by chefs, I convinced Richard we needed to try it.

When we harvested these black futsu pumpkins, their skin was starting to show some signs of changing to a buff tan color, but they were more of a mysterious gray.  We weren’t quite sure what to expect.  Will they store well?  Will they continue to ripen in storage?  We didn’t have a lot of information to work with, so we had to just figure it out on our own.  I had planned to work them into the schedule much earlier, however when I cooked one and tasted it, it really was pretty bland and did not match the flavor profiles I had read.  So we left them alone for a bit.  We were pleasantly surprised to find this variety actually holds up very well in storage!  They also continued to ripen and now they have very little to no gray coloring on the skin.
When I cooked one recently, I was surprised to see the color of the flesh had changed to a darker, bright orange color and the flavor was much different than my first experience!  So it seems we made the right decision to wait!  I tried cooking this pumpkin different ways and the options for what you can do with these little guys is endless!  The flesh is dense and holds up well to roasting and pan-frying.  When baked, either whole or cut in half, the flesh was moist, smooth, creamy and sweet.  The descriptions I read also indicated that the skin was edible.  It does have a very thin skin and given the bumpiness of the exterior, I didn’t want to attempt to peel it.  When pan-fried or roasted the skin gets nice and crispy and offers a nice contrast to the soft, smooth flesh.  When I baked the pumpkin whole and scooped out the flesh, I ate a little piece of the skin.  While it was edible, I didn’t find it as delectable and did discard it.

So what are you going to do with these cute things?   As I mentioned before, this variety is delicious when roasted.  You can either cut them into wedges or chunks, toss them with oil, then roast them on a sheet tray.  I’m not usually a fan of pan-frying squash, however this one is a candidate for this method.   I would recommend cutting thin slices about ⅛ - ¼ inch thick.  Cooking them on a griddle or in a cast iron pan in butter yields a nice crispy, golden final product.  You can also cut them in half and bake them in the oven.  Honestly, if you don’t want to mess with anything else, just bake them and eat the flesh seasoned with a touch of salt and pepper and a pat of butter.  It’s delicious just like that, however you could also stuff the pumpkin halves with a filling of your choosing.  Of course, you can scrape the cooked flesh out of the shell and use it to make a wide variety of things.  In one of my trials, I used a paring knife to cut a circle around the stem, about 1 ½-2 inches in diameter.  I lifted this little section out and used a spoon to scoop out the seeds, then put the little lid back on and baked the pumpkin until the flesh was tender.  If you are careful when you scoop the flesh out of the skin, you can use the skin as a little bowl to hold your pumpkin creation.  With the holidays coming up, this would make a festive and eye-catching presentation.  I wouldn’t serve soup in it, but you could serve Pumpkin Hummus, Pumpkin Goat Cheese Dip with Caramelized Onions or even Pumpkin Fruit Dip!  Don’t be afraid to eat pumpkin for breakfast too.  I found some tasty recipes for Pumpkin Baked Oatmeal with Maple and Pecans, Pumpkin Overnight Oats, or even Pumpkin Cream Cheese to spread on a bagel or toast!

Store your black futsu pumpkins at room temperature and use them as a decoration until you’re ready to eat them!  Once you’re ready to cook them, give them a little scrubbing and then get to work.  I forgot to mention that the seeds are also edible.  Before cooking, extract them from the flesh, rinse them and lay them out on a tea towel (the seeds will stick to the towel, so don’t use paper or anything fuzzy) or a plate to dry.  Once dry you can toss them with a little oil and season them with salt and pepper or seasonings of your choosing before toasting them in a 350°F oven.  These seeds really are tasty and, in my opinion, worth the effort to extract them.    If you have children, this is a great kitchen job for them! One more tidbit of information I gathered from my experiments is that one medium sized black futsu pumpkin will yield about ¾-1 cup of cooked flesh.  I hope you have fun experimenting with the Black Futsu! 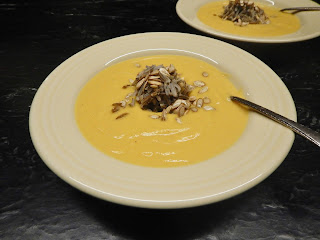 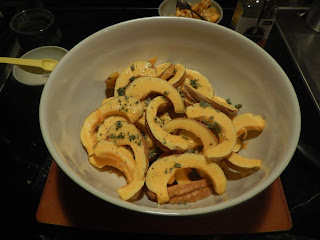