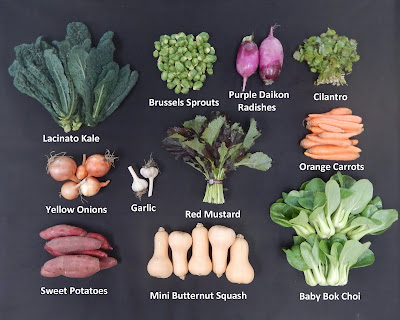 I love learning about new vegetables, and this week we have another purple beauty to share with you! In this week’s box you’ll find beautiful bright purple daikon radish.  Some people love radishes and others are still learning to like them.  If you’re in the latter group, I hope you’ll stick with me and hear me out.  This is a delicious and beautiful radish to eat!  Daikon radishes originated in Asia, so it’s fitting to go to Asian cultures to figure out what to do with them.  One of this week’s featured recipes is for Soy-Pickled Daikon (see below).  These are so very easy to make, so if you don’t do anything else with the daikon, at least make this recipe.  These pickles can hang out in your refrigerator and you can eat them in small quantities as a condiment with vegetables, meat or grains.  While there is some vinegar in the brine, they are more sweet and salty as opposed to sour or overly acidic.  In traditional Chinese cuisine pickled vegetables such as these are often served with rice porridge, which leads me to the next featured recipe, Congee with Chicken and Greens (see below).  I thought this was a fitting recipe to go along with the Soy-Pickled Daikon since Congee is rice porridge!  There is no one single recipe for Congee as it is one of those common household recipes that everyone puts their own spin on.  This version includes chicken and greens, which could be bok choi, red mustard or kale from this week’s box.  Feel free to make it your own and garnish it with whatever toppings you like, such as cilantro which is also in this week’s box.  Serve it with some of these pretty Soy-Pickled Daikon on the side.  Congee is simple to make but has a long cooking time.  If you want something that is more “set it and forget it,” check out this recipe for Congee in an Instant Pot.  I’ve also included a simple recipe for Daikon Apple Slaw (see below).  This is a crunchy, fresh salad with a light vinaigrette.  The tartness of this salad would make it a good accompaniment to fatty, rich foods such as short ribs or grilled chicken thighs.

We’re excited to be sending the first Brussels sprouts this week!  Use them to make Roasted Garlic Brussels Sprouts, or use them raw and turn them into this Brussels Sprouts Casear Salad!  Make sure you cut this recipe in half because it calls for 2 pounds of Brussels Sprouts and you only have 1 pound in your box.  This will then serve 3 to 4.

Now that we’ve seen the first snowfall, soups are going to become more of a regular part of our weekly meals, starting with this Silky Ginger Sweet Potato Soup.  This is a good recipe to hang on to and make throughout the winter as it will warm you both by its temperature as well as the warming ginger.  If you want something a little more hearty, use sweet potatoes to make Sweet Potato and Black Bean Chili.

Did you see the cute little butternut squash we have this week!?  These cuties are delicious just simply baked, but if you want to do something more with them, turn them into Vegan Butternut Black Bean Nachos.  The nachos are topped with chunks of roasted butternut and there is a sauce, reminiscent of nacho cheese sauce, made from pureed butternut squash.  If nachos aren’t your thing this week, maybe pizza is?  If so, here’s a knock-your-socks-off recipe for Sweet N’ Spicy Roasted Butternut Squash Pizza with Cider Caramelized Onions & Bacon.  There’s a lot happening on this pizza, but all of it will be well worth your time!

Every now and again you just need a simple meal of a good, homemade burger.  What goes with burgers?  Fries!  Jazz up burger night with Carrot Fries with Curry Dipping Sauce!  Life is about balance though, so now that we’ve had our fill of (healthy) nachos, pizza and burgers, lets make sure we eat our greens too!  We are nearing the end of greens season, so lets make the most of these last fresh ones.  Not sure what to do with red mustard?  Check out this article and find “10 ways to Use Mustard Greens”.  If you don’t use them to make congee, you could also use either red mustard or this week’s baby bok choi to make this recipe for Vegan One-Pot Ginger-Scallion Ramen Noodles.  This is simple, warming, nourishing, and who doesn’t love noodles!

Don’t forget the lacinato kale!  Have a spaghetti squash hanging around, use it to make Spaghetti Squash with Kale Pesto.  Thanksgiving is only a few weeks away, so you could also get a jump start on cooking for the big day and use the kale to make (Freezable) Stuffing with Caramelized Onions & Kale.  While you’re caramelizing onions, you might as well do some extra and turn them into Caramelized Onion Dip.  You could pre-caramelize the onions, freeze them, and then make the dip the day before Thanksgiving.  You have to have snacks to munch on while watching football, right!?

That’s a wrap for this week.  I’ll see you back next week with one more fresh from the field green and we’ll get started on planning for Thanksgiving!  Have a good week—Chef Andrea 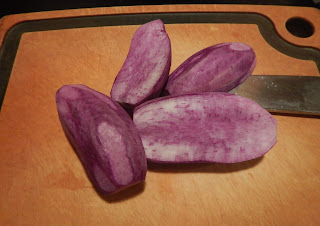 It’s been several years since we included daikon radish in CSA boxes, but you know we have an obsession with gorgeous purple vegetables and couldn’t resist trying this purple daikon!  This is our first year growing this variety, called bora king.  Its beautiful purple color, which extends through to the center, is what first caught our attention, but it has some other great qualities as well.  First of all, it’s much smaller than traditional white daikon radish that can grow to be more than 12 inches long!  It’s hard for a small family to eat that much radish and white daikon is one vegetable I don’t like to have remnants of hanging out in my refrigerator due to its pungent aroma.  This purple daikon, however, is much smaller which makes it more manageable to use.  It also has a delicious, slightly sweet, balanced radish flavor.  It does still taste like daikon, but I think it’s a little more balanced flavor than some white daikon that can be pretty pungent.

Daikon radishes are classified as a winter storage radish and are an important part of many traditional cultures throughout Asia.  Because of its ability to be stored, it’s an important winter food both because it’s available but also because it is high in nutrients including vitamin C which can help keep us strong and healthy throughout the cold winter.  Radishes are actually one of the oldest cultivated food crops and there are literally thousands of different varieties.  In the book, Roots, by Diane Morgan, she cites the following history:  “Radishes are likely indigenous to Europe and Asia and are believed to have been first cultivated in the eastern Mediterranean before 2000 B.C., probably in Egypt, where they were reportedly included in the daily rations, along with onions and garlic, given to the workers who built the pyramids.” 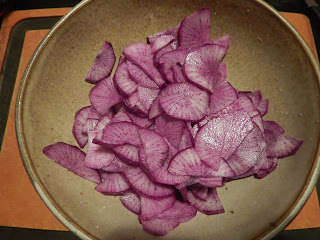 Daikon radish can be used in a variety of ways, both raw and cooked.  In Chinese and Japanese culture daikon radish is often pickled, another tactic to help preserve this food and so it is available throughout the winter.  Pickled daikon radishes, such as the recipe included in this week’s’ newsletter, are often served as a condiment. One of this week’s recipes is for Soy-Pickled Daikon, borrowed from the book Phoenix Claw and Jade Trees, a book about traditional Chinese cooking.  The author explains that pickled vegetables, including daikon, are often served with rice porridge.  After reading this I had to go do a little research and found that congee is the name given to rice porridge.  I am by no means an expert on Chinese food, culture or history, but I am always intrigued to find out about traditional dishes.  Congee is often eaten for breakfast, but it really can be eaten at any meal of the day.  It is a dish that came from peasant food and is a way to make a small amount of rice go a long way.  My understanding is that there is no one or right recipe for congee, rather everyone has their own version they identify with and the one they like is probably the one their grandmother made!  This week I have included a recipe for Congee with Chicken and Greens.  This is a fitting recipe to go along with the Soy-Pickled Purple Daikon which can be served as a condiment alongside this dish.  This week’s box also has plenty of greens to choose from (bok choi, red mustard or kale), all of which are appropriate for this recipe.

Now that we’ve talked about congee, lets get back to daikon!  Daikon radish may also be used in salads and other fresh condiments, often paired with other vegetables and dressed with a light sauce or vinaigrette.  Daikon radishes are also used in stir-fries and braised dishes.  It was interesting to learn that in some areas of China daikon is used in braised stews and soups, such as what would be equivalent to our beef stew.  Whereas we would use potatoes, they often use chunks of daikon radish.  Of course, remember daikon has a lot of nutritive value, so adding it to hearty broths and stews is a great way to fortify the soup.  Daikon radishes are also traditionally used in Korean kim chi, which is once again an important food to eat both for nourishment and health throughout the winter.

Store daikon radish in the refrigerator, loosely wrapped in plastic to keep it from dehydrating.  It will store for at least 4-6 weeks if not longer.

“Pickling in soy brine is one of China’s ancient methods of preserving vegetables.  Any firm vegetable can be used for pickling once its moisture is leached out using salt and sugar.” 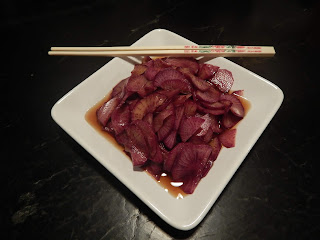 Yield: 4 servings as an appetizer, or more as a condiment

Congee with Chicken and Greens

“Congee is a smooth rice porridge, and it’s really all about the toppings.  Even in its plainest form, however, it’s wonderful.  Top with hot sesame oil, Kimchi, scallions, soy sauce, sesame seeds, cilantro, or anything else that calls to you.”

1 cup white rice
10 cups water, stock, or whey
1 Tbsp kosher salt
2 boneless, skinless single chicken breasts (4 to 6 oz each)
1 ½ cups tender greens, cut into thin ribbons (spinach, tatsoi, bok choi, mustard greens, or any other green you have on hand)
Note from Chef Andrea:  As indicated in the introduction, you can garnish congee with any additional ingredients you’d like.  I’d recommend some chopped cilantro on top and serve it with the Soy-Pickled Purple Daikon Radishes on the side!

Variations:
Recipe borrowed from The Homemade Kitchen, by Alana Chernila.