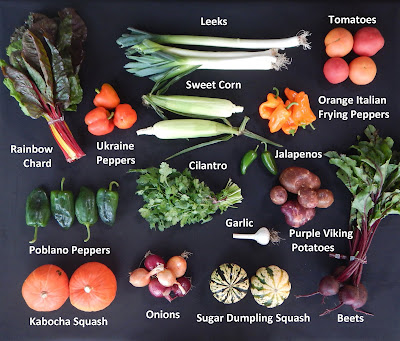 Lets kick off this week’s Cooking With the Box discussion with two simple recipes that just might have a chance at being family favorites.  Lets start with dessert first.  Last year I found Deborah Madison’s recipe for Fall Flan with Maple Yogurt and Caramel Pecans (see below).  It was actually a sweet potato flan recipe, but it is just as delicious with winter squash as it is with sweet potatoes!  I adapted the name to “Fall Flan” and here you go.  I really like this recipe because it’s very simple and streamlined.  Basically all the flan ingredients go into the blender to be mixed, then you pour it directly into custard cups or ramekins and bake it in the oven.  Once it’s baked and cooled, you can serve it with a dollop of maple yogurt (simply stir maple syrup into plain yogurt) and, if you want to go all out, make the caramelized pecans to put on top.  If you’re short on time you could also just do a spoonful of premade vanilla yogurt and some simple chopped nuts.  Besides being simple to make, I like this recipe because it relies on the sweetness of the vegetable along with a little maple syrup to give it its sweetness.  Aside from the touch of sugar on the nuts, there is no refined sugar in the recipe!  I also like it because it can be dessert, an after-school snack, or you could even have it in the morning for breakfast.  It’s delicious eaten warm, at room temperature, or chilled.  You could even bake it in short pint jars so you can put a lid on it and take it to go for lunch!

The second recipe we’re featuring this week is a Squash & Poblano Quesadilla with Pickled Jalapenos & Chipotle Crema (see below).  Don’t be intimidated by the length of the recipe.  There are multiple steps to get all of the quesadilla components prepped, but once you have the components it takes no time to make the quesadilla.  This is a good recipe to prep on the weekends so you can pull off a simple, hot dinner in 15 minutes or less during the week!  This recipe calls for delicate squash, but you could also use sugar dumpling, butternut or even kabocha squash in its place. The key is to keep the slices of squash thin.

If you aren’t feeling like quesadillas this week, how about pizza?  This recipe for Roasted Butternut Squash and Poblano Pizza also caught my eye and is a great recipe for this week’s vegetables.  It calls for butternut squash, but you could use roasted kabocha squash or even the delicate in its place.  Top it off with some crumbles of queso fresco and fresh cilantro for a tasty vegetable pizza!

I have to admit, tomatoes have been a challenge this year and we haven’t been able to offer you the variety and quantity we had planned for.  Nonetheless, we’re thankful for what we have and still can enjoy a few old favorite recipes as well as a few new ones!  This past week I came across this simple, yet flavorful, recipe for Tomato Rice Pilaf with Chickpeas.  While the rice is cooking, you mix fresh garlic with lemon, chopped walnuts, basil and olive oil.  That makes a dressing of sorts that is tossed with tomatoes, cooked rice and chickpeas.  This makes a delicious vegetarian main dish, or you could serve a smaller portion as a side dish along with chicken, fish or steak.  Any kind of tomato can work in this dish.

While we’re talking about tomatoes, I should mention this recipe for Cod with Leeks and Tomatoes.  This is a light dinner option featuring the lean cod with tangy tomatoes and silky leeks.  A nice, light simple meal to mark the final days of summer.

What do you do when you only have a few ears of corn to work with?  Use the corn as an accent ingredient instead of the main attraction!  I love adding a small amount of fresh corn to dishes because it lends a little pop of sweetness, color and a little texture contrast.  Here is a simple recipe for Pasta with Swiss Chard & Corn.  This is a pretty quick and easy recipe to assemble.  If you have some leftover chicken or steak you could toss it in for a little extra protein, or even stir in a can of tuna.  Here’s another take on corn with pasta in this Bell Pepper & Corn Pasta Salad.  This is a colorful salad featuring sweet peppers, red onions, corn and fresh herbs.  The recipe calls for basil and parsley, but if you could also use some of the cilantro in this week’s box if you like.  Take this for lunch along with a deli meat sandwich or serve it for dinner with a grilled burger.

I love chard because it can be used in so many different ways, both raw and cooked.  If you haven’t yet found a use for it this week, consider making this Restorative Rainbow Chard & Leek Soup.  I like to balance some rich meals with some lighter meals and this soup works for that purpose.  Silky leeks mingle with the chard leaves which soften in the hot broth.  Arborio rice adds some starch and body to the soup and it’s finished with fresh herbs.

It must be a pasta kind of week!  I have two more recipes based on pasta.  Check out this colorful Beet Pesto & Greens Pasta!  This recipe uses both the beet roots and the green tops!  While we typically make pesto from green leafy vegetables, this recipe turns the root into a “pesto” type sauce that is tossed with the pasta and the greens are wilted in with the hot sauce and pasta.  This will definitely be an attention getter!

And the final pasta recipe of the week, 15 Minute Lo Mein.  I like vegetable lo mein because you can eat it hot or at room temperature and you can toss in any vegetables you want!  Carrots, sweet peppers, onions, etc are excellent options for the week, but you could also include the leeks.  Kids will love this recipe too, I mean who doesn’t love a bowl of noodles!

Ok, we’re rolling into the home stretch.  If pasta wasn’t comforting enough, read on for a few more  comfort food ideas!  Mashed potatoes anyone?  I had forgotten about this recipe for Sweet Pepper Mashed Potatoes that I developed several years ago.  Purple Viking potatoes are a great choice for this recipe.  You can use either the Ukraine or Italian Frying peppers to make this recipe.  These potatoes are light and fluffy and full of flavor!  Serve these with Skirt Steak with Cilantro Garlic Sauce for a complete meal option.

I grew up in a meat and potatoes Mennonite community.  At nearly every celebration dinner or potluck they would serve either mashed potatoes or scalloped potatoes.  So, if you don’t make the mashed potatoes this week, consider Scalloped Potatoes with Leeks!

Ok, we started this week’s chat with something sweet, so lets end it on a sweet note as well!  Lets turn those carrots into some kind of a baked treat this week.  Perhaps a loaf of this Carrot Coconut Bread or this Easy Carrot Coffee Cake.  Both would be a great option to enjoy as you sip your Sunday morning coffee, read the newspaper and embark on a day of relaxation.

And that officially brings us to the bottom of another box.  I’ll see you back again next week!  Cross your fingers for a little more corn and get ready for the Korean chili peppers!  Have a great week!—Chef Andrea 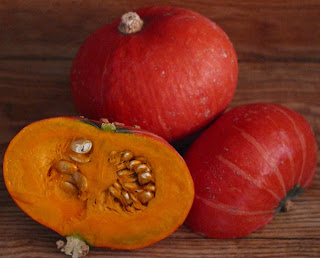 This week we’re packing one of our longtime favorite squash varieties, orange kabocha.  You’ll recognize this squash by its bright orange skin and rounded, disc-like shape.  This variety is also sometimes called a Japanese Pumpkin and is similar to other squash varieties such as orange kuri and buttercup.  The flesh is dark orange in color and has a silky, custard-like texture when cooked.

This is a versatile squash and may be used for a variety of preparations including soup, puree, baked goods, curries, stews or simply roasted.  Most of the time this variety may be used in recipes that call for buttercup, butternut, or orange kuri as well as any recipe calling for pumpkin.  The flavor of this squash is excellent and surpasses even the best tasting pumpkin.

There are several ways you can cook this squash. My easy, low maintenance method is to just cut the squash in half, remove the seed cavity and put the squash halves, cut side down, in a baking dish.  Add a little bit of water to the pan and bake the squash at 350°F until the squash is soft and tender when pierced with a fork.  Remove from the oven and turn the halves over so they can cool.  Once cool enough to handle, scoop the cooked flesh out of the shell and either mash or puree the flesh.  You can use it to make a simple squash puree seasoned with spices of your choosing and a pat of butter.  Orange kabocha puree can also be used in baked goods and desserts.  This rich, sweet flesh makes a delicious pie filling and yields rich, moist, flavorful quickbreads, muffins, pudding and soufflé.


Aside from baking, kabocha squash may also be roasted or simply steamed.  In Japanese cuisine, kabocha squash are also referred to as Japanese pumpkins.  Known for their simple, clean preparations, you’ll find Japanese recipes for kabocha squash to be equally as simple with just a few ingredients.  Slices or chunks of kabocha squash are often steamed or simmered in a simple dashi broth with kombu seaweed and sometimes miso, soy sauce and sometimes sake.  This is a classic and common way to prepare kabocha squash in Japan.  It is often a component in Japanese bento boxes (healthy Japanese take out) and is often served as a side dish.  You can also roast kabocha squash as you would prepare any other root vegetable or potato for roasting.  When prepared this way the exterior of the squash gets nice and crispy while the flesh inside stays moist and sweet.

While this squash can usually be held for longer storage, I would encourage you to eat this week’s selection sooner than later.  We’ve already seen some of them starting to deteriorate, so watch them carefully and if you notice any spots starting to form on the exterior, cut that area out of the squash and cook the remainder immediately. 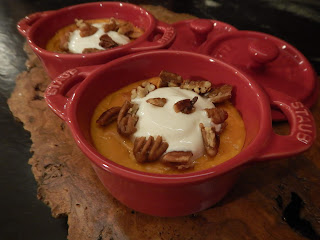 
This recipe is an adaptation of one originally published by Deborah Madison in her book, Vegetable Literacy. 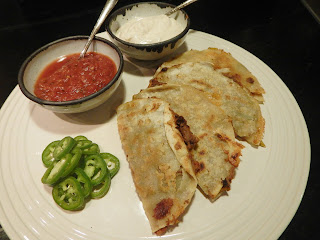