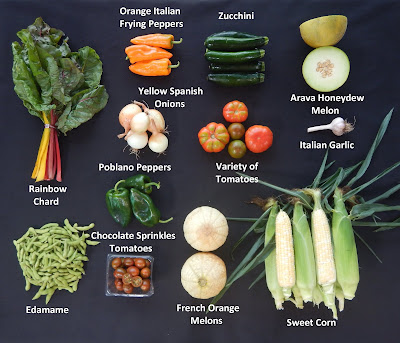 Sunorange, Red Grape or Chocolate Sprinkles Tomatoes: 47 Recipes You Can Make With a Pint of Cherry Tomatoes; Zucchini Panzanella Salad; Cheese Tortellini with Tomatoes and Corn

Red or Rainbow Chard: Creamy Chicken and Greens with Roasted Poblano and Caramelized Onion (see below)

I don’t know what it is about poblano peppers, but I look forward to them every summer and can’t get enough of them!  So, I’m excited to share them with you as this week’s featured vegetable and I have two tasty recipes as well!  The first recipe is one I developed by accident one night when I really didn’t have a plan for dinner.  While these accidents don’t always turn out, this one was actually a keeper.  So I introduce to you, Cheeseburger Pie with Roasted Poblanos and Corn (see below)!  This is kind of a cross between a frittata, quiche and some kind of burger based casserole.  It has just the right amount of creamy cheesiness without being overpowering and the sweetness of the corn goes well with the background flavor of the roasted poblano peppers.  This got the Farmer Richard and Captain Jack seal of approval!  It also reheats very well.  I actually baked it off, cooled it and then sliced it into portions the next day then reheated it in the toaster oven for lunch.

The second recipe is for Creamy Chicken and Greens with Roasted Poblano and Caramelized Onion (see below).  This recipe caught my eye because it’s simple, but got good reviews for having a lot of flavor with a short list of ingredients.  I also liked it because it includes greens, specifically chard which is in this week’s box!  Serve this dish with warm corn tortillas, rice, or just eat it on its own.

We’re also excited to include sweet corn in this week’s box!  Farmer Richard knows how to grow delicious sweet corn and I think you’ll be pleased with this!  Eat it off the cob, or cut it off the cob and use it in recipes such as this Fresh Corn Salsa made with sweet peppers, onions and tomatoes.  This is delicious to just scoop up with chips, or spoon it over a grilled pork chop or baked fish.

Summer isn’t summer without sweet corn and….MELONS!  While we’re on the topic of salsa, I’ll share this recipe for Grilled Chicken with Honeydew Salsa.  I don’t often think of eating melon in savory preparations, but if you get Honeydew Melon in your box this week, it’s a good option for using in something savory like this salsa or Cucumber Honeydew Salad with Feta.  If you get the Sweet Sarah Cantaloupe in your box this week, consider using it to make Cantaloupe Lime Popsicles or Jerk Shrimp Tacos with Spicy Melon Salsa.  As for the French Orange Melon, these are delicious eaten just as they are.  If you want to try something different, may I suggest this Prosciutto Melon Salad?  The salty prosciutto is such a nice accompaniment to the flavorful, decadent melon and a little drizzle of high quality balsamic vinegar helps finish it off.

Despite the fact that we’ve been picking zucchini for weeks now, we still haven’t run out of things to make with it!  Last weekend I tried this recipe for Blueberry Lemon Zucchini Muffins which turned out great!  This recipe for Zucchini Cornmeal Pancakes is a recommendation shared by a member in our Facebook Group.  These are a more savory pancake that I think would be good served with just a pat of butter or top them off with Tomato Jam.

On the topic of tomatoes, I came across this collection of 47 Recipes You Can Make With a Pint of Cherry Tomatoes.  Of course cherry tomatoes, grape tomatoes, sunorange tomatoes, etc can be used interchangeably in recipes.  There are some good suggestions in this collection including Zucchini Panzanella Salad and Cheese Tortellini with Tomatoes and Corn.  Before we finish our conversation about tomatoes, we need to talk sandwiches. Richard has started his BLT marathon, although he’s only had two sandwiches this week (…. the week isn’t over yet).  But you don’t have to go to the trouble of frying bacon to enjoy a good sandwich.  Consider Merrill Stubbs recipe for My Best Tomato Sandwich.  The key to this simple sandwich is a)  good bread and b) good mayonnaise spread generously.  This is the simplicity of summer!

This week we’re sending another pound of edamame, fresh soybeans.  This was our featured vegetable last week.  If you didn’t have a chance to try last week’s recipes, I’d encourage you to check them out.  I really enjoyed the Thai Quinoa Bowl.  It was filling, packed in a lot of vegetables, and the tofu was excellent!  In fact, Richard (who is not a fan of tofu) actually said “This is really good!  It’s the best tofu I’ve ever had!"  It’s also easy to prep all the components in advance which means you can assemble a quick lunch or dinner in less than five minutes!  The other recipe we featured last week was for Sushi Salad with Brown Rice, Edamame, Nori and Miso Dressing, another great salad to have in your back pocket for a quick meal option.

That wraps up another week of summer cooking.  I’ll end with a little teaser….watermelons coming next week!  Have a great week—Chef Andrea 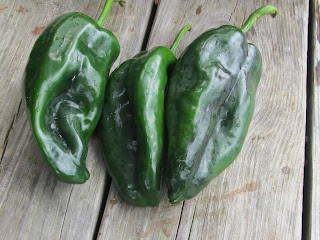 Poblano peppers have come to be one of my favorite peppers over the past few years.  Why?  Flavor.  Poblano peppers are dark green with wide shoulders and a pointy bottom.  They have a thinner wall than bell peppers, but thick enough that they hold up to roasting very well.  In fact, roasting is the process that takes the flavor of a poblano and brings it to its full potential.  Poblanos do have some heat which is on the mild side, but in some years moves up to a medium heat level.

Because of their size and shape, poblano peppers are excellent for stuffing with meat, grain and cheese mixtures.  Chiles Rellenos is a classic dish based on roasted poblano peppers that are filled with cheese, coated in a batter, and fried.  We have a few recipes in our archives that have become some of my favorite summer recipes to make when poblano peppers are available.  These include Roasted Poblano, Onion & Jack Quesadilla; Caramelized Poblano Chile & Onion Dip; Vegetable Enchiladas with Tomatillo Cream Sauce.

While poblano peppers may be used raw, I mentioned their flavor is enhanced with cooking and more specifically, by roasting.  Roasting peppers is very easy and can be done over a direct, open flame or in the oven.  If you have a gas stovetop, you can roast the poblanos directly on your burners over a high flame.  If you have a small rack, you can put that over the burner.  The other direct flame method is to roast them on a grill.  If you want to use an oven, it’s best to roast them under a broiler.  If you don’t have a broiler, you can roast them in a very hot oven, they likely won’t blacken as much.  You want to roast them until most of the skin is blackened.  You’ll have to turn them periodically to blacken all sides evenly.  Stay close and don’t walk away because sometimes this happens quickly, especially under a broiler.  Once the skin is charred, put the peppers in a covered bowl or a paper bag so they can steam and cool slightly for about 10 minutes.  Once cool enough to handle, use the back of a knife to scrape away the skin.  Remove the stem and scrape away all the seeds from the inside of the pepper.  Now you’re ready to add roasted poblano peppers to whatever dish you’re preparing! 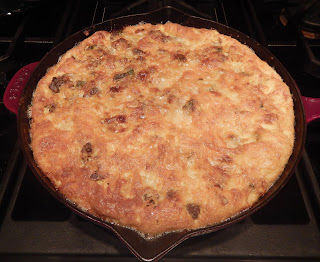 Creamy Chicken and Greens with Roasted Poblano and Caramelized Onion