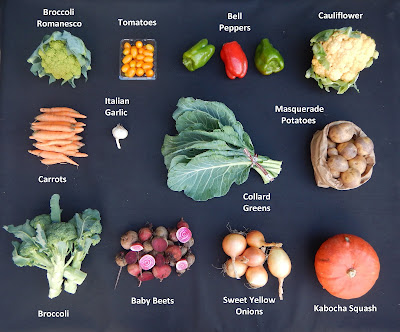 Cooking With This Week's Box:

Grape Tomatoes or a Variety of Tomatoes: Breakfast Burritos 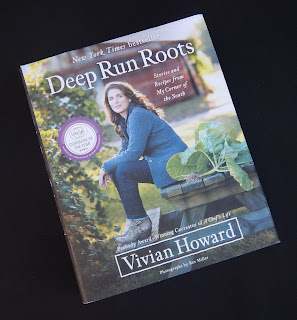 If you read this week’s newsletter article, you’ll know that our sweet potatoes are all harvested and are currently being “cured.”  This is a process we use to develop their starches into sugar and set the skins so they store longer.  We’re excited to start eating them, but not yet!  So, get your sweet potato recipes ready, they’ll be coming soon.  While we impatiently wait for sweet potatoes, we have plenty more delicious vegetables to enjoy.  This week our featured vegetable is collard greens, an interesting green that is kind of like kale and kind of like cabbage.  This week I’ve featured southern Chef Vivian Howard’s recipe for Collard, Carrot & Raisin Salad (see below).  This is a way to use the collards in their raw form to make a light, bright, flavorful salad that would go well with grilled beef or pan-fried fish.

I’m on a carrot-soup kick now, so I’m going to suggest another carrot soup for this week.  This one was recently featured at Loveandlemons.com and it’s for Carrot & Coconut Gazpacho with Lemongrass.  You can eat it chilled or warm it slightly.  Pair this along with this Beet, Grapefruit and Avocado Salad, from the same author.  Another beet salad suggestion that would go well with this soup is this one for Carrot, Beet & Coconut Salad with Sesame.  Either one will pair well with the soup and make for a light, nourishing lunch or dinner.

This recipe for Meatless Baked Ziti with Red Kuri Squash popped into my inbox shortly after last week’s feature about kabocha squash.  Red Kuri squash is very similar to orange kabocha squash and can be used interchangeably.  This is a pasta dish I’m sure every member of the family will enjoy with a lot of fresh flavors from tomatoes, squash, mushrooms, and of course cheese.  Serve this with some Roasted Broccoli Romanesco and dinner is set!

I had forgotten about this recipe for Charred Cauliflower Quesadillas until I stumbled over it last week while looking for a different recipe.  This recipe calls for poblano peppers.  If you have some from a previous delivery, great—use them!  If not, consider using this week’s sweet peppers instead.  If you still want a little heat, you could add a few pinches of cayenne or chile powder to the cauliflower.

I’ve never used recipes from Dr. Andrew Weil’s website, but I came across it this week and there are some good, simple vegetable centric recipes there.  This week I want to try this recipe for Spicy Garlic Broccoli with Pine Nuts.  I think I’ll serve this with his recipe for Sweet & Spicy Gouchjang Chicken using some of the HVF Korean Chili-Garlic Sauce I made a couple weeks ago when we had the fresh Korean chili peppers!

If you’ve been reading these weekly articles throughout the year, you’ll know Richard and I are big fans of Breakfast Burritos.  We eat them for breakfast frequently, but have also been know to have them for lunch and dinner too!  I was thrilled when I saw this blog post all about Breakfast Burritos on Smitten Kitchen.  So this week I’m going to encourage you to use your potatoes and bell peppers to create your own breakfast burritos to enjoy at whichever meal of the day fits your fancy.  In her recipe she calls for spinach, but you could also easily substitute collard greens or any other green you have.  And finally….chopped fresh tomatoes to finish them off.

There you have it friends….yet again we’ve managed to cook our way to the bottom of another CSA box.  Have a super-awesome week and I’ll see you back next week for more delicious recipe talk!—Chef Andrea Yoder 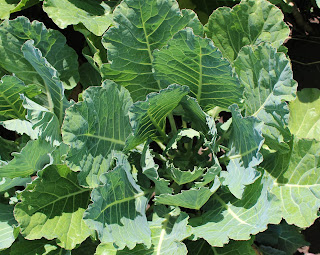 I grew up in Indiana, a region where collard greens are not a staple part of local diets.  We had one neighbor who grew up in the south and grew collards in his garden.  His name was Brooks and he stayed true to his southern roots and ate his fair share of collard greens along with mustard and turnip greens, which were also not amongst the regular vegetables in our regional fare.  Despite his influence, it wasn’t enough to convince my mother to try them and they remained a foreign vegetable to me until I came to Harmony Valley Farm.  Collard greens are available from late June through October or early November, but we usually reserve them for eating in the fall.  Collards are in the Brassica family and get sweeter as the temperatures cool off.  They feature large, round, flat leaves that resemble a flat cabbage leaf.  While they are related to cabbage and have a flavor similar to cabbage, they never form a head.  Collard greens, as with many other leafy green vegetables, are packed with nutrients including Vitamins A, C, E, K and B6 as well as riboflavin, calcium, iron, manganese, thiamin, niacin, magnesium and potassium.  With a nutrient profile like this, we have to find a way to incorporate them into our diets!

In this country, many associate collard greens with southern cooking where this green is considered more of a regional staple ingredient.  In fact, South Carolina voted to make it the official state vegetable in 2011!  Collard greens are thought to have originated in Asia, a descendant of a wild cabbage.  This vegetable then spread to other parts of the world and likely made it to America by way of ship and European settlers.  Collard greens are now eaten in many other parts of the world including India, Brazil and throughout Europe.

Collard greens have a thicker leaf than some other greens we grow such as spinach or chard.  They usually require a longer cooking time to soften and tenderize the leaf.  In southern cuisine, collards are often cooked with some sort of pork cut such as salt pork or a ham hock.  The meat is the flavoring agent used to cook the greens, which are cooked for quite awhile until they become dark green and very soft.  The remaining liquid is called pot likker and is seldom discarded.  Rather it is soaked up with a biscuit or cornbread or some may even drink it.  While collards do require a little more cooking, you don’t have to cook them until they are super soft to enjoy them.  You can also stir-fry or lightly saute them just until bright green.  They’ll have more texture to them and not be quite as soft, but are still quite delicious.  Because of the broad leaf, collards may also be steamed and then the leaf can be used as a wrap to hold a filling.  You can also use them as you would use a grape leaf to make Middle Eastern dolmades (stuffed grape leaves).

Collard greens obviously pair well with all salty, fatty pork products.  They also go well with garlic, ginger, chiles, coconut and spices including coriander, cardamom and turmeric, lending to some of their uses in Asian and Indian cuisine.  Of course, they also pair well with black-eyed peas, white beans, corn, potatoes, and roasted peanuts.  Slice them thinly and use them to make a creamy cole slaw to accompany BBQ pork sandwiches.  Use them raw in salads, cook them into flavorful bean soups, use them to make collard kraut, or cook them in more of a traditional southern way.

Store collards in a plastic bag in the refrigerator until you’re ready to use them. 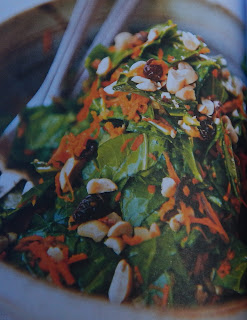 This recipe was borrowed from Vivian Howard’s book, Deep Run Roots.  Vivian is the co-creator and star of the award-winning PBS series A Chef’s Life, which tells stories about the people, food, and culture of the Carolina Coastal plain where she grew up.