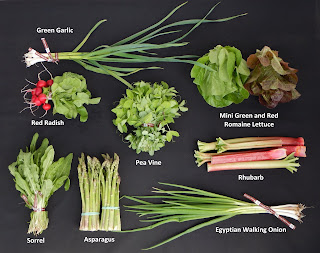 Cooking With This Week’s Box:

This Week’s Summary of Recipes & The Vegetables They Utilize:

While it feels like spring has been slow to come this year, I’m always amazed at how the natural progression of vegetables always happens and each week we’re able to pack our CSA boxes.  Just as ramps were winding down, asparagus started to come in and this week we’ve replaced the ramps with green garlic and Egyptian walking onions.  We also have several new greens in this week’s box along with a splash of color from pretty little radishes and rhubarb.  Yes, we have plenty of ingredients to use this week!

Our featured vegetable this week is rhubarb, which may be used in both sweet and savory preparations.  One of this week’s recipes is for a Chipotle Rhubarb Sauce (see below) which may be used as an Enchilada Sauce or treat it like a barbecue sauce and use it to baste barbecued chicken, grilled pork chops, pork loin roast or serve it with grilled or pan-fried salmon.  I used it on a pork loin roast and it was delicious!  I mixed some of the leftover sauce into mayonnaise and used that as a spread to make sandwiches with the leftover pork.  The sauce has a little kick of heat from the chipotle and the rhubarb gives it a nice tanginess that works well with meat.

If you prefer a sweet recipe for your rhubarb, I’ve shared my Grandma Yoder’s recipe for Rhubarb Custard Pie (see below).  It’s been probably 20 years since I made this recipe, so I was happy to find the recipe on a card in my old recipe box.  The recipe was one of my grandma’s typical recipes, written in the cryptic way that only my grandma and those who know her would understand.  I had forgotten how easy this pie is to make!  It really doesn’t take much to put it together, and don’t be afraid to use a prepared pie crust if you need to expedite the process even more.  Grandma always used water in the filling, likely because it was more thrifty than using precious milk or cream as you normally would to make custard.  If you prefer a creamier filling, substitute milk for the water in the recipe.

I hope asparagus season will continue for several more weeks as I have accumulated a stack of asparagus recipes I really want to try!  This week I’m going to use the asparagus to make this recipe for Spring Salad with Asparagus and Soft Boiled Eggs.  The mini romaine lettuce heads will work great for this salad. This recipe is written for a single serving, so you’ll need to double it if you’re serving two people or quadruple it for four servings.  If you use both heads of lettuce for this recipe, you should be able to make four servings of this salad.  This salad will be great for a light lunch or dinner served simply with a piece of buttered toast.  You could also add a few sliced radishes! 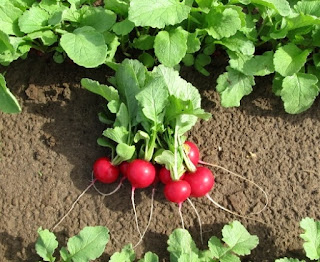 I look forward to spring radishes every year and can’t get enough of them!  My favorite way to eat them is dipped in salt, and a little butter.  I came across this simple recipe for Radish Toasts with Scallions featured on the Edible Communities website.  It’s the perfect combination of radish, butter and salt with a little extra flavor from onions.  These simple toasts will be delicious using some of this week’s Egyptian walking onions.  I’m going to make these for our weekend brunch served with a fried egg.

The green tops on this week’s radishes are beautiful!  Don’t discard them, they are edible too!  Radish greens are a nice spicy green that may be sautéed with other greens or on their own.  I’ve been chopping them up and sautéing them with a little bit of green onion and green garlic and then I use that as the vegetable base for our scrambled eggs in the morning.  Add a little bit of feta cheese and it’s a delicious and invigorating way to start the day!  There’s also a recipe for Radish Top Pasta with Chickpeas and Parsley that we featured in a newsletter back in October 2016.

I’ve been anxiously and impatiently awaiting sorrel!  This is a delicious, unique green that many people enjoy in soup such as this Sorrel & White Bean Soup.  However, this week I am using the sorrel to make Frosty Banana & Sorrel Smoothies!  This is a refreshing and invigorating way to start your day and a super-easy way to eat your greens!

The pea vine surprised us and really grew over the past few days, so we decided to go ahead and include it in this week’s box.  Every spring I look forward to making Pea Vine Cream Cheese.  This is a very simple recipe and is especially good when made with the Egyptian walking onions.  You can spread this on a bagel for breakfast or lunch or use it to make a wrap.  We usually fill our wraps with leftover cooked chicken, salmon or a little crumble of bacon along with whatever fresh vegetables are available.  This week you could add some diced red radish and roasted asparagus or some of the romaine lettuce.

Finally, the last item in your box is the green garlic.  I’m going to use this week’s green garlic to make these savory Green Pancakes.  The green in these pancakes comes from green garlic (both the greens and the lower white portion) as well as spinach.  If you don’t have spinach in your refrigerator, you could also substitute nettles if you have some remaining from the previous delivery.  This would also be a good way to use the radish tops!  Serve these with a little dollop of sour cream and enjoy them with eggs or as a side dish along with fish or meat for dinner.

I hope you enjoy this week’s recipes and have fun cooking with these fresh, spring vegetables.  We have more exciting vegetables coming up very soon including hon tsai tai and baby white turnips!  See you next week!—Chef Andrea

I grew up in a Mennonite & Amish community where it’s expected that everyone has a rhubarb plant in their back yard.  I loved to harvest rhubarb and we looked forward to eating it every spring, mostly in the form of pie.  In the world I came from, I only knew rhubarb as a “fruit” that paired well with sugar in my Grandma Yoder’s kitchen to create a delicious rhubarb custard pie or a rosy rhubarb sauce we would spoon over shortcake.  My mother made a delicious rhubarb crisp, Aunt Marty made tasty rhubarb snack bars, and there was a lady at church that made this magical dessert that was simply called rhubarb fluff (and likely contained Cool Whip as the main ingredient.)  It wasn’t until my adult life that I learned that rhubarb is really a vegetable and can be used in savory ways as well!

Rhubarb is thought to have originated in the areas of China, Mongolia and Russia.  Before it was used as a food, rhubarb root was traditionally used as a medicine to treat a wide range of ailments.  Its culinary use also started in the east where it was used in drinks and meat stews before later spreading to Europe and finally the United States at the end of the 18th century.  It now holds a special spring time slot in our Midwestern diets.

Rhubarb is part of the knotweed family of plants that also includes sorrel and buckwheat.  Both rhubarb and sorrel are perennial crops that we rely on to fill the gap in our diet between stored winter vegetables and spring planted crops.  Both rhubarb and sorrel are high in oxalates which is what gives both of these vegetables that sour, tangy flavor characteristic of both.  In the case of rhubarb, the stalk is the edible part of the plant and the leaves are discarded.  Rhubarb may be eaten raw, however it is pretty sour in the raw state so most individuals prefer to cook it first.

While the tart, sour flavor of rhubarb is often masked or covered with copious amounts of sugar and sweeteners, it doesn’t have to be that way.  Instead of masking the characteristic flavors of rhubarb, why not use those innate qualities to your advantage?!  Rhubarb pairs well with fatty meats such as duck, pork, chicken thighs and salmon.  The tartness of the rhubarb helps to balance the fattiness of the meat as well as eggs and dairy products such as cheese & cream.   In a previous newsletter, we published a recipe for Braised Pork Shoulder with Rhubarb- Red Wine Sauce.  It also helps to wake up your taste buds which makes it easier for you to experience other flavors in a dish.  The flavor of rhubarb can stand up to bolder spices such as curries, cardamom, peppercorns, cinnamon and ginger.  Rhubarb can be used as a stir-fry vegetable, added towards the end of cooking so it just starts to soften, but still holds its shape.  It can also be used to create a flavorful braising liquid and then sauce for pork and other meats.  It also makes a delicious compote or chutney to eat alongside Indian food, spoon over grilled or roasted meats, or simply eat as a snack with cream cheese and crackers! 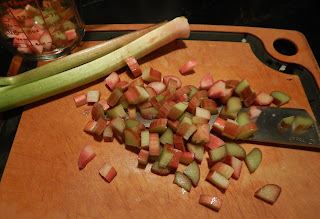 Rhubarb should be stored in a plastic bag in the refrigerator to keep it fresh and firm until you’re ready to use it.  If it gets a little floppy or dehydrated, don’t throw it away as it can still be used in dishes where you’re cooking the rhubarb.  Rhubarb can also be frozen for later use.  If you want to freeze rhubarb, simply wash the stalks, cut into smaller pieces (size is up to you) and put it in the freezer in a freezer bag.  You do not need to cook rhubarb before freezing it, you can freeze it raw.

This recipe was adapted from the recipe for Swiss Chard and Black Bean Enchiladas with Chipotle Sauce that was featured at naturallyella.com.  You can use this sauce as an enchilada sauce or treat is like a barbecue sauce and baste it on grilled chicken or pork chops or slather it on a pork roast.  It would also make a good dipping sauce for chicken strips or mix it with mayonnaise to make a sandwich spread. 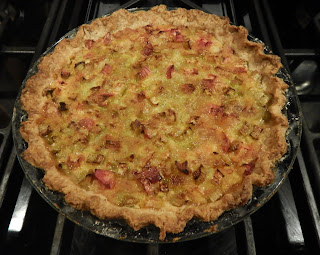 1.       Preheat the oven to 400°F.  Roll out pie dough to a thickness of about 1/8 inch.  Put the pie dough in an 8 or 9 inch pie pan and trim the excess dough from around the edges.  Crimp the edge of the pie crust if you would like and then put the pie crust in the refrigerator until you finish preparing the filling.
2.       In a medium mixing bowl, beat 2 eggs until pale yellow, then add the water and beat until the mixture is frothy.  In a small bowl, mix together the sugar, flour, cornstarch and salt.  Once the dry ingredients are combined, add them to the egg mixture and beat well to combine.
3.       Remove the pie crust from the refrigerator and put the diced rhubarb in the pie crust.  You want enough rhubarb to fill the pan evenly.  Pour the egg and sugar mixture over the rhubarb. 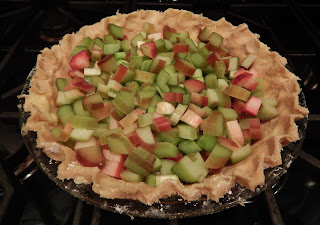 This recipe has been passed down through our family and is the rhubarb pie recipe my Grandma Yoder always made for us.  Her original recipe was essentially a list of ingredients with a few comments eluding to the procedure.  I interpreted the recipe, recreating it to match the memory of it in my mind!  While I’ve never tried this, I think you could substitute milk for the water in the filling to give a creamier filling that is more similar to traditional custard.—Chef Andrea
Posted by Harmony Valley Farm2 at 3:35 PM