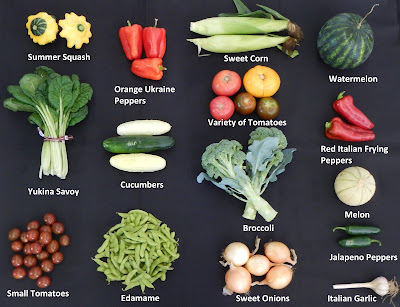 This week we’re focused on peppers, both in our main newsletter article and as our featured vegetable of the week!  Depending upon the weather, we could have a few pepper-heavy CSA boxes coming up over the next few weeks.  There are so many ways to use peppers, but if you start to feel overwhelmed, remember they are super-easy to preserve.  Read this week’s vegetable feature on our blog for details about how to preserve peppers.  As for what to do with them this week, lets start with the Whole Wheat Udon Noodle Salad with Summer Vegetables and Sesame Marinade. (See Below)  I actually made this recipe for the first time during the winter using edamame, corn and peppers that I pulled out of the freezer!  This is an easy salad to make and incorporates several different vegetables from this week’s box including edamame, an ear or two of corn, and lots of sweet, ripe peppers and onions.  This recipe travels well, so this would be a great item to take to work for lunch.  Add some baked tofu if you’d like or eat it alongside seared salmon, grilled chicken or steak.

I like to save the classical French preparation of ratatouille for late summer when sweet, red peppers are in their prime.  Alice Water’s Ratatouille, originally published in her book, The Art of Simple Food, may be found at Food52 where it earned status as a “Community Pick.” Pick up an eggplant from the choice box and use it along with your zucchini or scallop squash, some of your tomatoes and some of your sweet peppers. You can eat ratatouille on its own as a main dish along with some crusty French bread, or repurpose it into a spread for pizza or flatbread, toss it with pasta, etc.

If your box contains cauliflower this week, check out this recipe for Charred Cauliflower Quesadillas found at Smitten Kitchen.  This recipe was tested by our farmer’s market manager, Sarah, who gave it rave reviews!  If your box contains broccoli, check out these Broccoli Balls, the creation of Sarah Forte found at her blog, The Sprouted Kitchen.  This is a kid-approved recipe.  If you don’t believe me, check out her blog and see pictures of her two cute kiddos eating these easy, tasty and highly portable broccoli balls.   This might make a good item for school lunches or an after school snack.

Andrea Bemis just posted this recipe for Spiced Cantaloupe and Honey Lassi on her blog, Dishing Up the Dirt.  This is a refreshing, simple way to enjoy this week’s French Orange Melon, or freeze the melon this week and pull it out of the freezer after melon season has passed and use it to make this delicious drink.

Sometimes you just need to go deep and do some frying at home.  I’m a sucker for a good onion ring and I guarantee these will surpass anything you might get at the county fair or off a food cart!  They’ve been on my mind for several weeks, so I figure it’s time to try this recipe for Southern Fried Sweet Onion Rings.  Eat them with a grilled burger, or Farmer Richard’s preferred sandwich at present, a BLT.  If you do go with a grilled burger, consider garnishing it with a homemade pickle.  One of our members shared this recipe in our Facebook Group for Homemade Pickles and cited them as “the best I’ve ever had!”  They added lots of dill, garlic and some slices of jalapeño peppers to their batch for extra flavor and some heat.  We may be nearing the end of cucumber season, so don’t wait to try this recipe.  Make it this week!


Yukina Savoy, the bunching green in this week’s box, is one of my favorite Asian Greens.  Right now it has a mild, balanced mustard flavor because of the mild summer we’ve had.  While you may cook this green, I think it’s in its prime for eating raw in a salad.  Put together your own Yukina Savoy Salad with Thai Peanut Dressing  and top it off with thinly sliced onion & sweet pepper, grated broccoli stem, and some of your small tomatoes cut in half.  Finish it with chopped peanuts or almonds and add some protein of your choosing if you’d like.


Finally, make a special after-school treat for the kids.  It’s hard to admit summer is coming to a close, but all good things must end.  Perhaps these Watermelon Popsicles will make the transition back into school a little more acceptable.


Well folks, I’m not sure what next week’s box will contain.  We’re nearing the end of the season for cucumbers and zucchini.  We’re hoping to continue picking tomatoes for a few more weeks, but at the same time we’re starting to harvest some late summer/early fall crops like celeriac!  Richard dug some sweet potatoes earlier this week and they are looking really good, but need more time and some heat!  Enjoy the final few weeks of summer!

Peppers are classified as either sweet or hot and can vary in size from just a small pepper that resembles a large bean seed to a big, blocky bell pepper.  While it is common to eat green peppers, you’ll find the  flavor of a green pepper is more mild without a lot of sweetness.  This is because green peppers are immature.  All colored peppers start out as a green pepper.  As the fruit ripens on the plant, it makes a transition from green to its fully ripe color.  As this change occurs, natural sugars develop in the fruit making it not only sweet but also flavorful.  As a pepper ripens, the nutrient content also changes.  Colored peppers can contain as much as 60% greater levels of antioxidants and other nutrients including Vitamins C, A, E, K, B6 and folate.

While most of the peppers we grow are sweet peppers, we do grow several hot varieties.  Our two main hot peppers are jalapeño and poblano peppers.  The heat of a hot pepper is mostly contained in the white pith and seed cavity within the pepper.  If you don’t have a tolerance for the heat, you can remove this portion of the pepper and significantly reduce its heat.  Two more words of caution when handling and cooking with hot peppers.  First, adjust the amount of hot peppers in the dish you are making to your liking.  Remember, you can always add a little more but you can’t take the heat away!  Second, it is advisable to wear plastic gloves and/or be aware of where you put your hands for awhile after you cut the pepper—as in don’t rub your eyes!

From a culinary perspective, peppers are versatile in use.  They can be eaten raw or cooked and pair well in dishes with other summer vegetables such as potatoes, zucchini, tomatoes and eggplant.  Peppers mark the transition from late summer into early fall, and as such can dance on the line between summer and fall which means they also pair well with sweet potatoes, fall greens, and winter squash to name just a few.

Peppers are part of many cultures around the world and, as a result, they are a key ingredient in some traditional dishes.  Ratatouille is a classical French dish from the Provence region.  It is a summer “stew” made from onions, garlic, sweet peppers, zucchini, eggplant, tomatoes and herbs.  It may be eaten as a dish on its own, served as a side dish, or re-purposed in many ways to become a topping for pizza, bruschetta, etc.  I learned about Shakshuka several years ago when I was researching peppers for the newsletter.  This is a dish thought to have originated in Tunisia, spreading through the Middle East and Northern Africa.  Tomatoes, onions and peppers create a sauce in the bottom of the pan and eggs are cracked on top.  The eggs are poached by the heat of the sauce.  This has become one of my favorite summer brunch or light dinner dishes.  Sweet peppers are also an important part of Spanish cuisine.  Sweet red peppers, along with tomatoes and onions, are paired to make sofrito.  This is used as the base for many other dishes, similar to a French mirepoix or the combination of garlic, ginger and onion in Chinese dishes.  There is also a Spanish sauce, Romesco sauce, made from sweet peppers and nuts (often almonds) that is thickened with bread and often served with seafood and fish.

Peppers are often roasted to not only develop their natural sweetness, but to also give them a smoky flavor.  You can roast any kind of pepper, but generally those with a thicker wall will yield better results.  There are several methods for roasting peppers---none of which are difficult.  Fire-roasted peppers can be charred over a direct flame, either on a grill or over a gas burner.  Just put the pepper directly over the flame either on a metal rack or just hold it with tongs.  Rotate the pepper until the outer skin is charred.  An alternative is to roast peppers under a broiler or just put them on a pan in a very hot oven.  This last method won’t give you as much of the smoky flavor, but still works great.  Once you’ve roasted the peppers on all sides, place them in a bowl while they are still hot and cover with plastic wrap so they steam as they cool.  Once they are cool enough to handle, pull out the cores and scrape the skin away from the flesh.  Now you can chop or slice the roasted peppers and add them to sauces, dips, salads, etc.

Peppers are one of my favorite vegetables to preserve and use throughout the winter.  They can be frozen raw or roasted, either whole or cut down into smaller pieces, strips or diced.  When you want to use them, just pull them out of the freezer and use them as a pizza topping, put them on sandwiches, or add to soups, stews, sauces, etc.  You can also preserve peppers by dehydrating them.  For most peppers, you’ll want to cut them into strips or smaller pieces so they dehydrate faster.  Peppers with a thinner wall are best for dehydrating.

Please note, while many recipes call for “Red Bell Peppers,” any sweet pepper will generally do fine as a substitute.  Our Italian frying peppers (orange or red), orange Ukraine peppers and mini-sweet peppers are our main sweet varieties.  You’ll need to use your best judgement as to how many of whatever sweet pepper you are using is equal to one bell pepper.  Typically I substitute two Italian frying peppers or 2 medium to small orange Ukraine peppers for one red bell pepper. 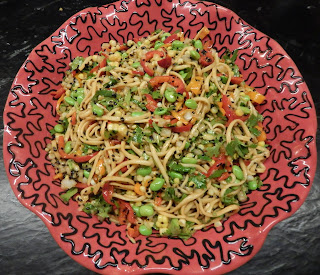 
Note:  This recipe was adapted from Amy Chaplin’s cookbook, At Home In the Whole Food Kitchen.  While this salad is delicious to make in the height of the summer vegetable season, you can also make it in the winter.  Thinly slice peppers and freeze them, raw.  Cook the corn, cut it off the cob and freeze the kernels.  Boil a pound of edamame pods and then remove the beans.  Pop those in the freezer too.  In the middle of the winter when you’re missing the summer heat, pull out your frozen vegetables and make this salad again!  Serve this on its own as a main dish item or as a side dish along with chicken, fish, tempeh or another protein of your choosing.

Yield:  4 servings as a side dish or small plate

Author’s note:  Make this a main dish by serving it over cooked quinoa.
Recipe borrowed from Naturally Nourished, by Sarah Britton.
Posted by CSA Coordinator at 3:06 PM