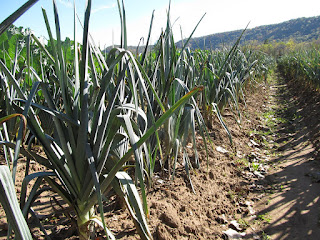 I like the way Deborah Madison opens the section on leeks in her book, Vegetable Literacy. “Leeks embody the delicate side of the allium tribe, adding more of a whisper and less of shout when it comes to the onion flavor.”  While leeks are in the same family with onions, shallots, etc, they have a more subtle flavor and softer aroma. They have less sugars than onions do, so they really don’t caramelize like onions. Rather, leeks should be cooked more delicately using lower heat and a longer cooking time to soften the leek. It’s better to sweat the leek gently which will yield a soft, silky texture. 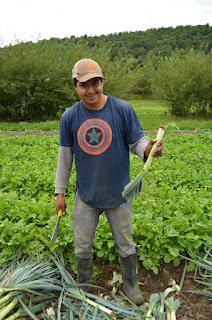 Leeks have a long white shank with a bluish-green “flag” like top. The shank is made of many thin layers and is the portion of the leek most often used. However, the green portion on top is equally edible and at the very least should be added to stock for flavor. Throughout the growing process, dirt is hilled up on the leeks to cover and blanch the shank. As a result, dirt may get between the layers. While you need to take care to carefully clean the entire leek, the upper portion may have a bit more dirt between the layers and may need a little more attention. I find it easiest to wash the exterior of the leek and then slice it. Place the leeks in a sink of clean, cold water and swish them around to remove any dirt. Remove the leeks from the water and place in a colander to drain. If there isn’t much dirt between the layers, you may also just place the sliced leeks in a colander and rinse them.
A traditional use for leeks is to make Leek & Potato Soup, of which there are many variations. Leeks pair well with potatoes, fennel, cabbage, celery, celeriac, apples, lemons, thyme, parsley and tarragon to name a few. Other ingredients that complement leeks include butter, olive oil, hazelnuts, walnuts, cream, eggs and cheese. Leeks may be used in soups, gratins, as a base for roast chicken or simply poached or sautéed and eaten as a side dish or drizzled with a simple vinaigrette for a nice fall or winter salad. Store leeks in the refrigerator for 1-2 weeks. 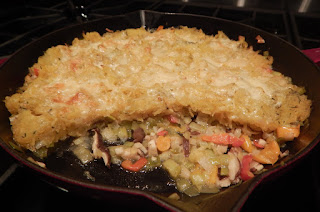 1. First, preheat the oven to 350°F.
2. Next, place the thinly sliced leeks in a colander and rinse thoroughly.  Shake off as much excess water as you can.  Set aside.
3. Prepare the spaghetti squash.  Place the cooked spaghetti squash flesh in a bowl and mix in 1 tsp dried thyme, ½ tsp salt and freshly ground black pepper.  Set aside.
4. In a 10-inch oven proof skillet, heat 1 Tbsp olive oil over medium heat.  Add the garlic and mushrooms and saute until the mushrooms begin to soften.
5. Once the mushrooms are soft, add 2 Tbsp butter to the pan and allow it to melt.  Add the leeks, sweet peppers, ½ tsp salt and freshly ground black pepper.  Stir to combine and continue to cook. Keep the heat at medium-low and slowly sweat the leeks and peppers until they are soft and there is little moisture in the pan.
6. Add the white wine and increase the heat just a tad.  Simmer until only a small amount of moisture remains in the pan.
7. Once the wine has reduced, add the heavy cream to the leek mixture and bring it to a simmer. 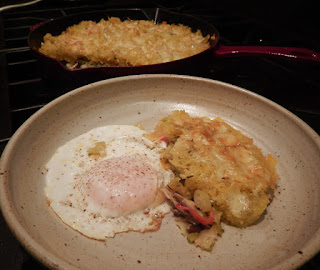 8. Spread the spaghetti squash mixture evenly on top of the leeks.   Sprinkle the shredded cheese on top.
9. Place in the oven for 10-15 minutes or until the cheese is golden on top.  Remove from the oven and serve warm. 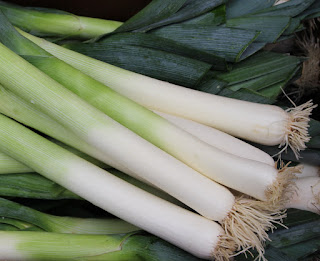 1. Prepare the leeks:  Trim off the root ends and the tough upper green tops.  Halve the white part of the leeks lengthwise and then, without cutting through the root end, cut lengthwise into ¼ inch-wide strips.  Then cut the leeks crosswise into ¼-inch dice.  Wash the diced leeks thoroughly in a large basin of cold water. Once the dirt has settled, scoop them out with a sieve or strainer.  Drain and set aside.
2. Heat a heavy-bottomed pot over medium heat.  Add the olive oil or butter, followed by the leeks, thyme and bay leaf.  Cook, stirring occasionally, until the leeks are tender, about 10 minutes.  Peel the potatoes and cut them into ¼-inch dice or slices.  Add the potatoes to the pot and cook for 3 to 4 minutes.  Pour in the chicken stock, season with salt, and bring to a boil.  Reduce the heat to maintain a low simmer, and continue cooking until the potatoes are tender, but not falling apart.  Taste for salt and adjust as needed.  Let the soup cool to room temperature, and refrigerate for several hours or overnight.
3. Before serving, remove the bay leaf and reheat the soup over medium heat and taste again for salt.  If you like, add a splash of champagne or white wine vinegar to sharpen the flavors.  Ladle the soup into warm serving bowls.  Finish with a few grinds of the peppermill, and garnish with chopped parsley or chives.

Author’s Notes & Variations:
- Vegetable soups often taste best several hours later or the following day.  If time allows, make ahead and reheat gently before serving.
- Remove the bay leaf and puree the soup before serving.  Garnish with small fried croutons along with the herbs.
- Stir in ⅓ cup heavy cream before serving.

Recipe borrowed from Alice Waters' cookbook, In the Green Kitchen.

Posted by CSA Coordinator at 9:59 AM