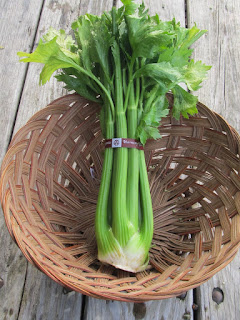 Last week the featured vegetable was celeriac, otherwise known as celery root. This week we are featuring its familiar cousin, celery. While these two vegetables are similar, they have some distinct differences. Celery is grown for its stalks above ground while celeriac is grown for its root. If you’ve never had celery grown in Wisconsin, you are in for a treat. It’s remarkable how much better it tastes than the celery grown in California!
The celery in your box this week may look a little different than the celery you may be accustomed to seeing in the grocery store. Celery is actually a fairly large plant. It has a center core and section of stalks which are the portion of the plant most commonly eaten. Around this center, the plant sends up smaller stalks which actually cover up and shade the center from the sun. This results in blanching the center core which means it is lighter in color than the stalks in the outer portion. Normally these smaller stalks are trimmed away at the time of harvest, but this outer celery is completely usable and very delicious! So, we asked our harvest crew to leave the outer portion intact and we chose to send you the whole thing! All you need to do is cut the stalks off the main base and wash them well. Don’t discard the leaves, they too are edible and contain a lot of flavor. They can be added to stock or soup for flavor. You can also use them to make celery salt or you can make celery pesto!
Celery is often used as a background flavor and ingredient, but seldom is it the star of the show. It is a staple ingredient used in the classical method for making stock, but is also often used to add background flavor to soups, braised meats and some fall and winter salads. It is cool and refreshing with a crunchy texture.  Celery pairs well with butter, olive oil, cream, walnuts, Parmesan, cheddar, blue cheese, pears, apples, olives, capers, potatoes, carrots and herbs including parsley, dill and cumin.
Slice it thinly and add it in a salad or quickly stir-fry the thin slices and then drizzle with toasted sesame oil. Celery is also a delicious ingredient in fall and winter soups. It can be used to round out the flavor when combined with other vegetables, or make it the featured vegetable in preparations such as cream of celery soup.
Store celery loosely wrapped in a plastic bag in the crisper drawer. It will keep for several weeks.

1. Chop the onion, potato, carrots, and celery into pieces that are about ½ inch or smaller. Do your best to cut everything roughly the same size, this will keep cooking time across the ingredients somewhat uniform. You should end up with about 2 ½ cups of chopped celery.
2. In a large thick-bottomed soup pot over medium high heat combine the olive oil, onion, potato, carrots, celery and a few big pinches of salt. Sauté for about ten minutes or until the onions and celery soften a touch and expel some water. Stir in the garlic and add the stock. Bring to a simmer and let cook for another 10 minutes or until the celery, carrot and potatoes are just cooked through - resist the urge to over cook them into mush.
3. Stir in the rice a few minutes before the potatoes and carrot are cooked though. Remove the soup from the heat and ladle into soup bowls. Top each with a generous drizzle of the celery leaf pesto (optional) and/or some Parmesan cheese.

1. Purée all of these ingredients in a food processor for about 30 seconds.

Recipe borrowed from Heidi Swanson’s blog, 101cookbooks.com.
Posted by CSA Coordinator at 9:58 AM