The SoilMobile...Come see it for yourself! 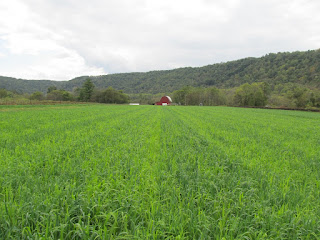 We’re moving into that point in the season that Farmer Richard likes to refer to as the “the crack between two worlds,” otherwise known as fall. Summer crops are winding down, fall crops are starting to come in and before long we’ll be harvesting the final crops for winter storage. This is also the time when Farmer Richard makes it a priority to “put the fields to bed for the winter.”  This means applying generous amounts of compost and planting cover crops. So why is this such a priority?  First of all, we don’t like to leave fields vulnerable to erosion by leaving them barren over the winter and the cover crops help keep the soil in place. The other reason cover crops and compost are high priority is because they help replenish and build the soil. The combination of cover crops and applications of compost are vital to ensuring our soils remain rich, full of biodiversity, and have bioavailable nutrients in place for next year’s crop.  Soil is nothing to take for granted…it is literally our life source, and it directly impacts our survival. So, as we set out, year after year, to grow food for you and your family, we take great care to ensure we are doing what we can to enrich and care for our soil. We admit, we’re still learning. Yes, after over 40 years of farming Richard is still learning about how to care for our soil! The bottom line is not all soil is created equally, and it’s just one more reason why it’s so important that we all understand where our food comes from, how the soil it grows in is cared for and form that connection between our food choices, our health and well-being and the environment. 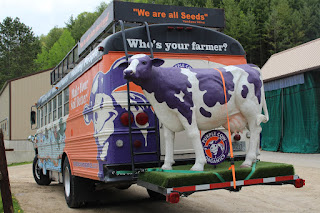 Our Harvest Party is coming up on September 25, and we’d like to introduce you to one of our friends who will be joining us for the day, Sandy Syburg. You’ll know Sandy when you see him…he’ll be the guy with a smile on his face talking about soil, compost, microbes…oh, and he’ll be standing beside a big bus with a purple cow on the back, a farm scene painted on the side, and quotes about soil written all over the outside of the bus.  Sandy is the President/Co-Founder of Purple Cow Organics, located in Wisconsin, and what I just described to you is Sandy’s SoilMobile. We have worked with Purple Cow for several years now. They make all of the potting soil we use to grow our transplants in the greenhouse and for the past two years we’ve purchased compost from them by the semi-truck load to put on our fields in the fall. We’ve invited Sandy to come to the Harvest Party with his SoilMobile, not because he’s looking to sell you potting soil or compost, but because he has a passion for soil and wants to help others learn more about how important it is for all of us…not just farmers! Sandy’s SoilMobile is actually a repurposed school bus that runs on alternative fuel. 2015 was declared the “International Year of Soils,” and Sandy had the idea to use the SoilMobile as a tool to bring attention to this important topic. Sandy toured around the Midwest in this bus with an educational mission to share this important message:  “The key to life as we know it is healthy soil, and if a nutrient is missing from soil it is not in the food we eat. Plants take nutrients from soil, and our soils are often depleted of the nutrients that plants, animals and humans need. Therefore our soil needs to be rejuvenated.”  Among Sandy’s messages: … “instead of loading soil with chemical fertilizers to make up for nutrients, microbes and organic matter lost over time, replace them organically. It can take hundreds of years to create just a small plot of healthy soil and less than two decades to destroy its usefulness. With soil under siege, everyone should be involved in learning and implementing ways to improve this vital ingredient in growing healthy plants and food.”  Sandy’s message isn’t just for farmers, he’ll talk to anyone! Urban gardeners, community gardens, basically anyone who is interested in growing healthy plants and/or eating healthy food. 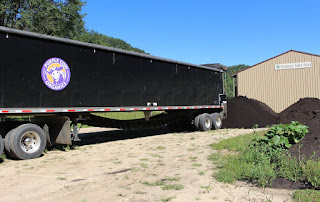 I had the opportunity to talk to Sandy last week to find out more about how he became so passionate about soil. I found out that Sandy actually has many interests and a whole hosts of projects that spin off of each other. To start off, Sandy is actually a “farm boy.”  He grew up on his grandparents’ farm. His grandmother had a 3 acre garden and grew vegetables for the five families that lived on the farm. Sandy’s job was to manage the compost pile under his grandmother’s direction. He remembers her talking passionately about “feeding the soil” and considered it criminal to let any organic residue go to waste. In fact, he remembers his grandmother seeing someone burning leaves in their yard….she did not approve. She sent her grandchildren to pick up the leaves and bring them back to their compost pile. She also referred to hauling manure as “hauling sunshine.”  Thus the concept and practice of making compost and respecting the integrity of soil was something instilled in Sandy’s mind even as a youth. Little did he know that it would become a major part of his life’s work! 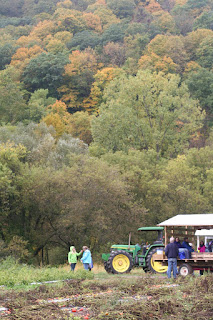 Sandy has been making compost since the mid 80’s. Over the years he’s been involved with promoting and developing the practice of composting.  In the early 90’s there were only a handful of compost facilities in Wisconsin. Over the years this picture has changed and now there are over 200 composting facilities in Wisconsin. In 1993 the DNR banned yard materials from going to the landfill. In 2005-2006, Sandy worked with the state to write new guidelines for composting. This is great because we are no longer sending usable natural products to the landfill. Instead, these residuals are being converted into usable nutrients. As Sandy says..“It’s a no-brainer! Why wouldn’t you allow nature to capture nitrogen in the air instead of having to buy it or use synthetic fertilizer.”
As we concluded our talk, Sandy reminded me that everything is so connected. We are at the intersection of local food and an understanding about how, where and by whom it was grown. Farmers are learning more profitable and sustainable ways of farming by managing nutrients differently and returning carbon to the soil. Consumers are becoming more ecologically aware and we hope more are becoming interested in the connection between the health of our bodies and the health of our food.
In case you haven’t noticed a theme in our newsletters recently….we’d like to encourage each of you to build and form a strong connection with the source of where your food is being grown and learn more about how it is grown. We hope to see you at the Harvest Party!
Posted by CSA Coordinator at 9:28 AM