By Lindsay the CSA Coordinator 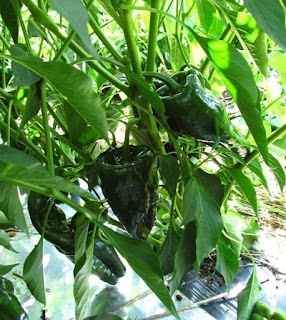 Originating in Puebla, Mexico, the poblano pepper is mildly spicy.  While it does have some heat compared to a sweet bell pepper, it is significantly less intense than a jalapeño.  You will still want to make sure to thoroughly wash your hands after chopping, but the oils are not intense enough as to require gloves when working with a few peppers.  The color of the poblano is such a dark green as to almost be black. You can identify poblanos by their dark color as well as by their shape: block-like on the stem-end but narrowing to a point.
You can use these peppers to add a subtle kick to many different dishes or as a main ingredient in recipes such as chile rellenos or mole sauce.  If you aren’t able to use them right away, raw peppers can be frozen after they are deseeded and chopped.  You can also freeze the peppers for later use after roasting and removing the skin.  Poblanos can also be preserved by drying the peppers and grinding them or storing whole.  If you have ever come across ancho chiles, these are the dried form of the poblano.  It can be helpful to store small portions of the dried peppers in several containers in case any mold began to develop while drying.
Because of their comparatively thicker flesh, poblanos will stand up to cooking without falling apart. They are great in summer soups and stews alongside other summer vegetables such as corn, tomatoes and tomatillos.  Poblanos are often roasted either using an oven broiler or other open flame. Let the charred pepper sit in a covered container for 15 minutes and the skin should subsequently rub off more easily.  Roasted poblanos have a unique flavor that can add interesting depth to tomatillo or tomato salsa as well as guacamole.  They are great in sauces atop summer vegetables, enchiladas or tacos.  Poblano Rajas is an easy condiment consisting of strips of roasted poblano pepper. You can either roast your poblanos and then cut into strips, or experiment with the time-saving recipe by Rick Bayless available at www.fronterafiesta.com/cook/salsa-a-condiments/262-poblanorajas. Also check out Chef Andrea’s recipe adaption below! 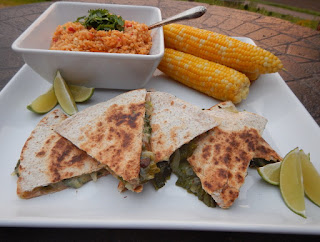 
1.  To roast the peppers using a gas flame: Turn a gas burner to high and char the poblanos directly over the flame, turning them with tongs as soon as each side becomes fully blackened, about 6 to 8 minutes per pepper. To roast the peppers in the oven: Preheat the oven to 400°F. Halve and seed the peppers and place on a parchment-lined (for easy cleanup) baking sheet. Roast for about 30 to 35 minutes or until charred in some places. (Don’t let them get too black or you will have trouble peeling them.)
2.  Immediately after roasting, put the poblanos in a bowl, cover, and set aside to steam and loosen the skins. When they’re cool enough to handle, peel the charred skin off with your hands or a small paring knife. Pull out and discard the stems and seed clusters (if you haven’t already). Slice the peppers into ¼ inch wide strips and put them in a small bowl.
3.  Put a baking sheet in the oven and heat the oven to 150°F (or its lowest setting).
4.  Meanwhile: heat 1 Tbsp of the oil in a large skillet over medium-high heat. Add the onion and cook, stirring frequently, until soft and lightly browned, 3 to 5 minutes. Add another tablespoon of oil and the mushrooms.  Continue to cook until the mushrooms are soft.  Add the poblano strips, season with a generous pinch of salt and a few grinds of pepper, and cook, stirring occasionally, until the peppers are heated through, another 1 to 2 minutes. Transfer to a plate and wipe the skillet clean. 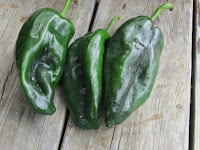 5.  Heat 1 tsp of the oil in the skillet over medium-high heat until hot. Add one tortilla and scatter over it half of the cheese, half of the poblano mixture, and half of the cilantro. When the tortilla smells toasty and the bottom is browned in spots, in 1 or 2 minutes, fold it in half, pressing it with a spatula to flatten it. Transfer to the baking sheet in the oven to keep warm. Repeat with the remaining ingredients to make one more quesadilla. Cut each quesadilla into wedges and serve with the sour cream or crème fraiche on the side.


Recipe adapted from www.alexandracooks.com.
Posted by CSA Coordinator at 2:56 PM