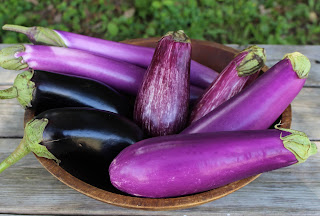 Eggplant is one of the most beautiful crops we grow.  The plants grow several feet tall and, in their peak, are loaded with beautiful glossy fruit hanging heavy on the plant.  There are many varieties of eggplant ranging in size from small round eggplant the size of a golf ball to large globe eggplant weighing over a pound.  They come in a variety of colors ranging from various shades of purple to black, green, lavender, white and orange.  We have narrowed our lineup of eggplant to our four favorite varieties including Lilac Bride, Purple Dancer, Listada and the traditional Black eggplant.
Eggplant is a member of the nightshade family.  While it is thought to have originated in the area around India and Pakistan, it has now been spread around the world.  Since eggplant is part of so many cultures, you can take your pick on how you’d like to enjoy it.  It is often incorporated into curry and stir-fry dishes in Indian, Thai and Chinese cuisine.  Sicilians are famous for eggplant caponata while Middle Eastern dishes include baba ganoush.  The French put their mark on eggplant with the traditional Provencal dish, ratatouille.  Eggplant has a mild flavor and soft texture when cooked. Many resources will tell you to salt eggplant before cooking it to remove bitterness.  While older varieties were bitter, the new varieties we grow have been bred so they are not bitter, thus you can skip the salting step.  Most of our varieties of eggplant have skin that is tender enough to eat, thus you do not need to peel them.
Eggplant does not store terribly well, so it is best to use it soon after getting it.  It is best stored at a temperature of about 45-50°F, but your home refrigerator should be colder than this.  Thus, we recommend storing your eggplant on the kitchen counter until you are ready to use it.  Use within 2-4 days of when you receive it.
Use the guide below to identify the eggplant in your box this week. 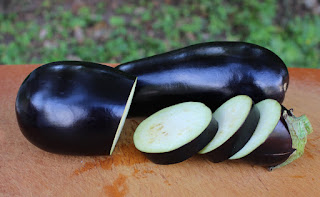 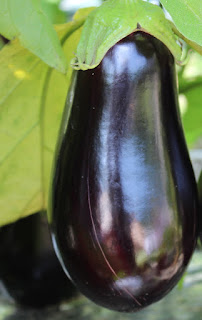 Black Globe Eggplant: This is the most familiar variety of eggplant. It is characterized by a dark skin that looks black. It is best used in dishes like Eggplant Parmesan or to make dips, etc.  This variety will also hold up on the grill or if roasted. 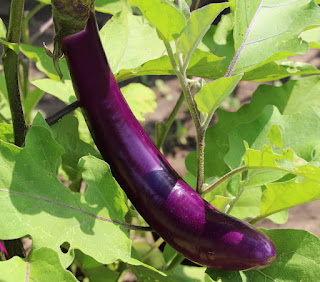 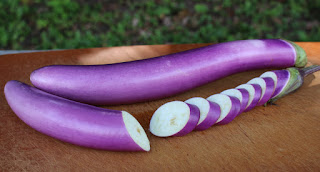 Lilac Bride Eggplant: Lilac bride eggplant is long and slender with lavender skin and white flesh. It is best used in Thai curry dishes, stews or any other preparation where you want the eggplant to hold its shape better. 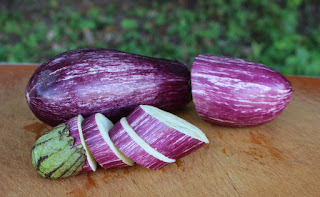 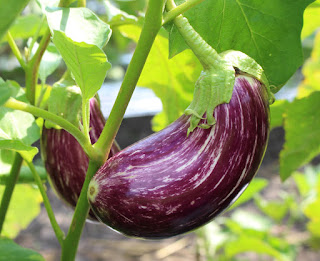 Listada Eggplant: Listada is characterized by a small globe shape with dark purple/magenta skin streaked with white stripes. It is an Italian heirloom variety characterized by dense “meaty” flesh that holds up very well with grilling or roasting. 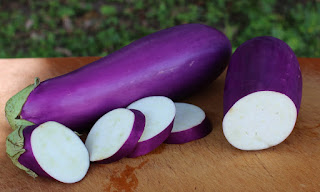 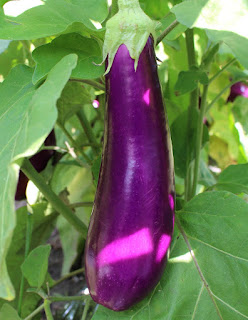 Purple Dancer Eggplant: This superb variety is characterized by an elongated tear drop shape and a bright purple skin. Purple Dancer eggplant is an all-purpose eggplant that has creamy, white flesh.  It is firm enough that it keeps its shape if you grill it or use it in curries, soups or stews. The flesh is also soft enough when cooked to use in dips, etc. 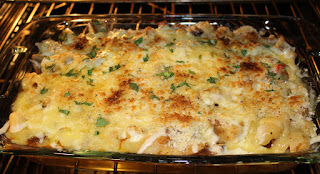 1.  In a large saucepan, heat the vegetable oil until shimmering.  Add the pork, if using, and cook over medium heat until browned.  If you are not using pork, skip directly to step 2. 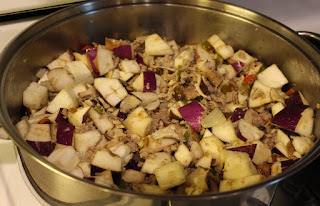 2.  Add the 2 Tbsp extra-virgin olive oil to the pan.  Add the onion, pepper, mushrooms and garlic along with a generous pinch of salt and pepper and sauté  over moderate heat, stirring, until the vegetables are softened.  Add the eggplant and ¼ cup of water and cover.  Cook, stirring periodically, for 8-10 minutes or until the eggplant is tender.  Remove the lid and add crushed red pepper and marinara sauce.  Continue to cook, gently, until the sauce is hot, about 4 minutes. 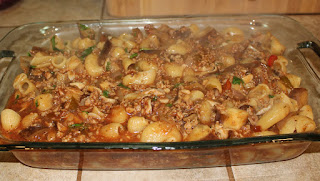 3.  Preheat the broiler and position the rack 8 inches from the heat.  Bring a large pot of salt water to a boil.  Add the penne to the boiling water and cook until al dente.   Drain the pasta, reserving ½ cup of the cooking water.  Stir the pasta, cooking water and the basil into the sauce and season with salt and pepper. 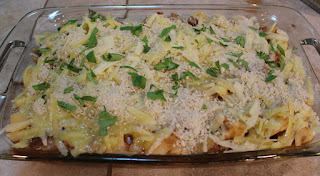 4.  Transfer the pasta to a 9 x 13—inch baking dish.  Scatter the mozzarella on top followed by the Parmesan and panko.  Broil the pasta for about 4 minutes, until the cheese is melted and the panko is lightly browned.  Serve hot.
Posted by CSA Coordinator at 4:54 PM

Eggplant is beautiful! I made baba ganoush out of mine. That is one of my all-time favorite dips/spreads.