Western Wisconsin: How Native Americans Lived In The Past: Part 1

In our last blog post in December, I introduced you to our neighbor Jim Theler.  Jim is an archeologist who has extensively studied the prehistoric people of our region. Our conversations have been spurred on by my findings of effigy burial mounds on our land last year.  I often wonder what daily life was like for those who lived on this land long before us.  I invited Jim to share his thoughts and the findings of his work to help us better understand these people.

I think it’s important to understand that the people Jim will be talking about in his articles, the Effigy Mound Builders, are actually a more recent culture inhabiting our land only 1,000-1,500 years before us.  However, Jim mentions that people actually lived on our land as much as 12,500 years ago!  This was during a time referred to as “the last ice age” when the glaciers were retreating north in Wisconsin.  Prehistoric mammals including mastodons, mammoth elephants, long-horned bison, giant ground sloths, dire wolves, short-faced bears, and giant beaver roamed the land at this time.  There were Native American people here as well who hunted these creatures with finely crafted and razor sharp spear points, possibly thrown with the aid of a powerful spear thrower called an “atlatl.”  Can you imagine?  I have actually found a couple of those very old spear points on our land which Jim helped me date back to this period!

So over the next couple thousand years the pre-historic animals disappear, became extinct and were replaced by the animals we know today.  The landscape changed as well to include trees and plants we are familiar with.  All the while, Native American people were likely living here, learning how to live with the changing climate, flora and fauna……Amazing!  I continue to find it very fascinating to learn more about these people and how they survived so many years ago. ---Richard 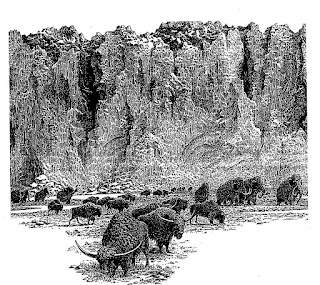 Recently, Richard de Wilde discovered several unrecorded “Effigy Mounds” on his Harmony Valley Farm and asked me to come and take a look. This led to a discussion of how the people who build these mounds lived in the past. As an archaeologist, I have spent the past 40 years excavating and analyzing the finds from the living sites of ancient Native Americans in western Wisconsin’s Crawford, La Crosse and Vernon counties.  Archaeologists have been studying the ancient mounds and living sites of these first Wisconsin residents since the 1850s and the work continues by archeologists working in the region in association with UW-LaCrosse. The first major summary was by Wisconsin’s first scientist, Increase A. Lapham, who in 1855 published maps of Effigy Mounds near the modern town of Eastman in Crawford County. This was followed in 1884 by a mound survey by T. H. Lewis who was sponsored by a wealthy Twin Cities resident A. J. Hill. Lewis’ work included recording several effigy mound groups in the North and South forks of the Bad Axe River, in Vernon County. Excavations in Crawford County were undertaken by the Smithsonian Institution in the Late 1880s. In the 1920s and 1930s, archaeologists from the Milwaukee Public Museum excavated a number of mounds in western Wisconsin. In the late 1970s, archaeologists from the University of Wisconsin-Madison began doing long-term excavations on many living sites in the region.

Before Europeans arrived, western Wisconsin was a region with scattered groves of white and bur oaks, referred to as oak savannas. The higher, rolling uplands and ridge tops one sees today around Westby and Viroqua, as well as the valley bottoms, had extensive tall grass prairies. The oak savannas and prairies were maintained by repeated fires of both natural and human origins. This is the vegetation Government Land Office (GLO) surveyors reported when they surveyed much of Vernon County in the winter of 1844-45. Many locations in the tall grass prairies of the uplands had no trees to serve as section corner “witness trees,” so the GLO surveyors had to pile rocks to mark section corners. Some wooded areas existed in areas naturally protected from fire (a “fire-shadow”) along some steep east- and north-facing hillsides/cliffs and along stream margins. Timber Coulee got its name as trees suitable for building cabins were available in its fire-shadow. One son of an early pioneer settler said it took his father two years to bring enough logs over the ridge from Timber Coulee by oxen to build a cabin and get their family out of the dugout in which they had lived. By some estimations today, we have 80 to 90 % MORE woodlands than at the time of European arrival.

(Richard’s Observation)  The woods we know today are different than they were at that time.   Today our woods are choked with prickly ash, locust and other invasive species that were established after woods were heavily grazed with sheep and cattle and then abandoned.  The largest and best trees are cut for lumber and the weak and deformed are left with the dead tops.  The woods that the earliest settlers describe are “clean and easy to walk through!”  Probably the result of 1,000’s of years of Native Americans hand harvesting dead branches for firewood.  Remember, they didn’t have axes and saws at this time, so they relied on dead trees and branches.

Archaeologists studying the refuse left behind at ancient living sites have been able to piece together how people lived in the past. We have found that Native American societies had ever changing styles of tools and advances in technology over thousands of years. When Christopher Columbus arrived in the “New World,” Native Americans had occupied the portion of North America we now call western Wisconsin for more than 12,500 years. We have found many prime locations that were used as living sites for thousands of years. Digging with great care, archaeologists find that materials closer to the surface tend to be more recent, and the finds grow older as we move deeper. These layered or “stratified” living sites allow us to see the changes in technology and “subsistence” (what people were eating) based on animal bones and burned plant remains.  For instance, we can see the first use of fired clay pots, the shift to the bow and arrow from the spear, and the arrival of corn horticulture. With modern technology we can use radiocarbon method to determine the ages of some ancient remains to within a few decades.
The shifts we see in technology and subsistence have allowed archaeologists to assign names and dates to well defined Native American “cultures.” We do not know what these ancient Native Americans called themselves, so the names we have given them are for convenience of discussion. In western Wisconsin, one well-known division in what we call the Late Woodland period is the Effigy Mound Tradition. This tradition of effigy mound construction is unique to the southern half of Wisconsin with some in adjacent parts of Iowa, Minnesota and Illinois. We will be looking at the people who built the effigy mounds from about A.D. 700 to A.D. 1050. How did Native Americans live in western Wisconsin a little more than 1000 years ago?

Through archeological excavation and analysis of the materials recovered, we have learned a great deal about ancient peoples in this area.  In addition, anthropologists who study human societies worldwide have added considerable information. We have learned that people at a given level of complexity organize their societies in similar ways no matter where they live. For example, people who live by hunting animals and gathering wild plants (hunters and gatherers) organize and carry out daily tasks in similar ways, no matter if they live in Australia (Aborigines), the American arctic (“Eskimos”), or the deserts of the American west (Shoshones)-they all have similar patterns of social behavior. We can take the framework that anthropologists have described for recent societies and add information about what archaeologists have found to understand the life-ways of the Effigy Mound people of western Wisconsin.

We will explore more about the ways & life of the Effigy Mound people in our next January newsletter as well as our first winter newsletter in February.