This is the time of year we start working more intensively on our fall “projects.”  In the field this often means clearing away brush and trees, cleaning up field perimeters, moving brush piles, etc.  Regardless of the work, there’s usually a task or two that require the assistance of our bulldozer.  We were reminiscing about this time of year recently and Richard remembered this article where we featured Vern & Ole—the original dozer operators who taught Richard everything he knows about bulldozing.

This week’s article was originally featured in our newsletter on October 30, 2004.  Richard still has fond memories of working with Vern & Ole.  In fact, just a few years ago we cleared some land and excavated a site to build our house.  Who did Richard call to do the work?  Richard coaxed Vern out of retirement to excavate the house site…just to make sure it was done right.  We always knew Vern was here when we heard the hum of the dozer…as early as 5:30 am!  Vern, now in his 80’s, wanted to get his work done in the cool of the day.  Ole lives and works on a neighbor’s dairy farm.  As you can see, these two gentlemen have embraced the slower pace of retirement.  We hope you enjoy this little trip down memory lane.


There is never a dull moment here at Harmony Valley.  Instead of winding down, in the fall we wind UP! We rush to stay ahead of the weather and to get all of our stored roots in before the ground freezes or the crops get damaged from the cold.  This fall has been very cooperative.  Mostly dry days and mostly above freezing temperatures have meant that we could keep the harvest coming.  The coolers are full, we have rented more refrigerated semi-trailers for storage than in past years, and we are ahead of schedule! 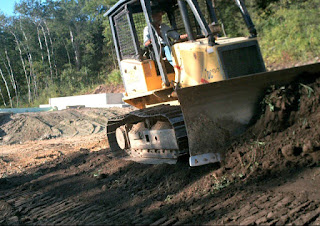 But, we have managed to fill up any spare time we might have had with our building projects.  First, we planned a machine shed to keep our more expensive equipment out of the elements and to have adequate space in which to repair them.  Then next to it we will build another greenhouse.  Our existing greenhouses have been too small for years now.  After a couple of drawings and sittings with Richard’s transit we were reminded that there’s very little level land on this farm that we don’t plant to crops.  We’d have to move some dirt from the upside to the down side to make a flat building site.  That’s where Vern and Ole come in.

Vern and Ole are originals.  They have lived in Vernon County for more years than we have memories.  Both should be retired, but neither have seemed to have heard the word.  Vern has been dozing so long that he can remember when he worked on constructing the first airstrips for O’Hare Field.  Knowing their reputations, we called on them for some advice and for their professional skills operating heavy equipment.

Vern and Ole both show up at first light.  They take no lunch break and you know they are around because there is a constant hum of diesel motors and clinking of dozer track.  In a few short days they transformed our hillside and pasture to the north of our yard into a flat, open space.  And the future machine shed and greenhouse across the road have an equally level home marked by stakes and pink ribbons.
When Richard watches Vern and Ole work their magic with big machines, he stands transfixed.  At first he maybe didn’t understand quite how skilled they were.  Vern took a look at the site, with the fence, some tall, scruffy box elders and cottonwoods and Derek’s (summer farm chef) humble trailer home.  We all agreed, the fence would be removed, then the trees would come down.  But, Vern didn’t think the trailer would have to move at all. There stood Richard, eyes moving from the tops of the trees to the little white camper sitting just yards away, skepticism written all over his face.  Before long Derek was toting his stuff out of the trailer and Brian was pulling it to the other side of the yard.  NO FAITH!  By early afternoon the trees were gone, off in a pile, and the empty spot that had once been the camper’s location remained unscathed, not even a branch or twig rested nearby.  Lesson one had been learned.

For the next couple of days Vern and Ole teamed up; Vern on the seat of the dozer shaving off the hill, and Ole scooping up the dirt with a giant end loader, moving it across the road.  Then Vern began the tedious job of leveling the dirt Ole had hauled.  That’s when Richard learned lesson two.  Years of operating the dozer gave Vern an instinctive eye that really didn’t need the help of Richard’s expensive laser transit.  The transit sat unused until Richard came along at the end of the work to confirm that Vern was dead-on! 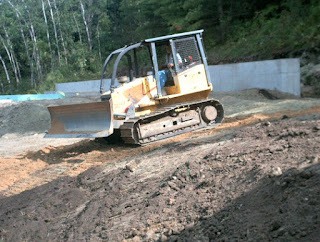 One day, before Vern and Ole loaded their equipment back up, we managed to coax them to the lunch table.  Derek had made grilled cheese on his signature sourdough and vegetable stir-fry with carrots, broccoli, parsnips and burdock! Both men ate with gusto, but it wasn’t lost on them that at least one of the vegetables was unfamiliar.  When Richard told them it was burdock, Vern told us a story.

He was hired by an old timer, a Polish immigrant, to “do a little work.”  When Vern arrived, the 84 year old man had already began the job.  He had excavated 1 foot deep all around the foundation of his barn, moving it all with a wheelbarrow and shovel; tons and tons of dirt!  Vern was amazed.  Vern later learned the man’s secret.  Balls of burdock burrs hung in the rafters of his barn.  The man said it was the burdock tea he made with the burrs and drank daily that kept him strong, and not sick a day in his life!  Wonder if Vern and Ole felt especially energetic after Derek’s lunch that day?
Posted by CSA Coordinator at 10:56 AM

Very nice and thoughtful article.
keep posting such articles for us.
Thanks for sharing.