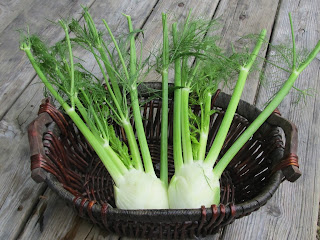 Fennel is such a beautiful vegetable.  As you walk between the rows of fennel in the field, you can’t help but run your hand over the soft, feathery fronds.  You’ll definitely be able to identify fennel from other vegetables in your box this week as it has both a unique appearance as well as a distinct aroma.   Most of the fennel plant is edible, however the white bulb at the base of the plant is the most commonly used part.  The soft, fine, feathery green portion extending off the stalks is what we refer to as the “fronds.” The fronds are also edible and can be used more as an herb, seasoning or garnish to add a bit of flavor to soups, salads, flat breads, pizza, beverages, etc.  The stalks are often too fibrous to eat, however they have a lot of flavor in them and can be added to simmering soups, stocks, etc.  If left to continue growing, a fennel plant will eventually produce seed and fennel pollen which can both be used in cooking as well.
Fennel has the flavor of anise, or mild licorice.  The bulb is crisp and sweet and can be eaten raw or cooked.  Raw fennel should be sliced paper thin and can be used to make a quick summer salad such as the recipe featured in the newsletter this week.  Fennel contains a volatile oil called anethole which is responsible for its licorice flavor and aroma.  When sautéed, roasted or otherwise cooked, the oils volatilize which lessens the intensity of the flavor and the sugars in the vegetable start to caramelize.  Thus, cooking mellows and sweetens the flavor while the color changes from bright white to a golden hue.  I’d encourage those who may not care for the intense flavor or raw fennel to try it in its cooked form.  You might find you actually like it! 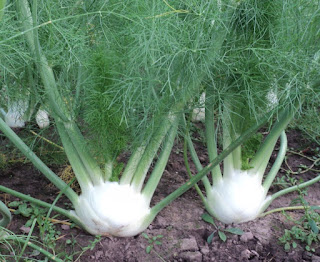 Fennel is often used in gratins, cream soups, seafood dishes, simple salads and antipasto platters.  It pairs well with a whole host of other foods including lemons, oranges, apples, honey, white wine, olives, beets, tomatoes, potatoes, fish, seafood, pork, cured meats, beans, cream, Parmesan cheese, feta cheese, cucumbers, dill and parsley.
Fennel has a lot of beneficial health properties as well.  It is a good source of calcium, iron, magnesium, zinc, and vitamins C & A.  The volatile oil I mentioned earlier, anethole, has been shown to reduce inflammation and help prevent some cancers.  It is also a natural digestive and breath freshener.
Fennel should be stored in the refrigerator, loosely wrapped in plastic. When you are ready to use it, you may need to peel off the outer layer of the bulb.  Cut the bulb in half and make a V-shaped cut into the core at the base of the fennel bulb.  Remove most of the core, then slice thinly or cut as desired.

Posted by CSA Coordinator at 9:07 AM