As we conclude our Future of Food discussion series, I can think of few better topics on which to ruminate than that of the latest feature—the joy of food. Food means something different to each of us. To it, we attach meaning, memories, and value. We often place it at the center of our gatherings, and around it we, in the company of our friends and families, convene and converse. As we’ve followed National Geographic’s Future of Food series over the last five months, we have taken on some rather controversial topics—modern day fish farming, the Paleolithic diet, hunger in America, the industrial beef business and biotechnology’s application to food production. In this final piece, I’d like to take a step back and reflect on the worth of exploring topics such as these. There is no time like the present to consider what food means to us and to ask ourselves: “What kind of food system do I want to be a part of?” 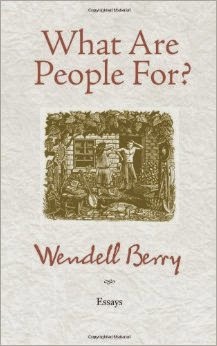 When I’m looking for a nuanced, yet straightforward discussion around the current state of agriculture in this country, I turn—invariably—to Wendell Berry. As a farmer himself, Berry has long written of many of the topics on which we have touched and possesses that elusive ability to present an issue in a brutally honest, yet still uplifting sort of way. For the purposes of this discussion, one of the more powerful statements he has written is recorded in his book What Are People For? He states very simply that “…eating is an agricultural act.” Today, we tend to think of food as a product of agricultural toil, but we often fail to go beyond that and regard ourselves as not just customers, but as discerning consumers. We buy food in various forms and from various locales, but for the most part, we make these decisions in a passive way. We choose from among the food options presented to us, and we pay the price attached to these items without asking what that price reflects. As Berry sees it, “The industrial eater is, in fact, one who does not know that eating is an agricultural act, who no longer knows or imagines the connections between eating and the land, and who is therefore necessarily passive and uncritical.” I would modify this by suggesting that these two extremes exist not in isolation but instead along a continuum—that at any point in time, we can move closer to or further way from the industrial eater extreme.

Operating from this point of understanding, I think there’s value in addressing a topic that is often left out of this discussion—that of personal guilt. Pursuing the type of food system that Mr. Berry and we at Harmony Valley Farm are trying to imagine and create is no small feat, and in many ways, the deck is stacked against us. I’ve found that over the years, as I’ve come to more deeply understand the implications attached to my individual food choices, the more guilt I feel when I choose to move closer to the industrial eater extreme. It’s true—sometimes I buy conventionally grown grapes or cheese made with milk that is not rGBH-free. Quite honestly, I think it’s nearly impossible at this point to live a life beyond the reach of industrial, conventional agriculture. Admittedly, my main motivation for making these purchases is price—I buy them because they’re cheaper than the alternative. The guilt I feel is a product of my decision to embrace the notion that individual choices matter. Yes, it’s a romantic approach to take, but at the same time, I truly believe in the power that individual effort yields. After all, at the end of the day, individual choices are to a great degree what propel larger efforts forward.

The visual learner that I am, I often regard each individual food item as the tip of an iceberg—a small part of a much larger whole. Beneath the surface lies the collective history of that food item—the agricultural inputs, the labor practices and the farming philosophy that together created that specific product. It was not until I started digging into the literature and thinking about where this information fit in relation to me did I begin to feel intimately connected to and invested in this larger system. Similar to the topics of faith and spirituality, I think deciding what food really means to us is an individual, reflective and ever-evolving journey. Exposing ourselves to information—in the form of the pieces covered in this series, for example—allows us to gather facts, consider multiple perspectives and ultimately formulate our own opinions. From here, we take action—we join a CSA, we begin to garden, we have conversations, we rent a library book, we sit and think. There is no “right” way to approach and react to these difficult topics.

At this point, I have to bring in a critical piece that is, as yet, missing from this discussion—many people are, to varying degrees, limited in their capacity to participate in shaping the type of food system we’re envisioning. As we explored (albeit briefly) in an earlier feature on “The New Face of Hunger” there are multiple obstacles—many of them entrenched—that limit this capacity. Income, transportation, awareness, a preoccupation with basic survival—innumerable factors shape and restrict the degree to which people engage with the food systems operating around us today. While this topic requires much more space than a single paragraph, I’ll settle for the words of Geoff Tansey, a member of The Food Ethics Council: “We need a fundamental change in the food system that has developed in the rich world…It is dysfunctional and unjust—and it fails to deliver a safe, secure, sufficient, nutritious diet sustainably for everyone with equity.” Put simply, there is an enormous amount of work to be done. Naming this problem is merely the first of many steps.

As this discussion series draws to a close, where does this leave us? For starters, we know that we all need to eat, and we know that food is, inherently, the product of a larger agricultural system. The food options we are faced with reflect a complex network of explicit choices and practices. If we more fully insert ourselves into the equation and begin to transform ourselves into active, rather than passive consumers, we will be taking a firm step towards creating an alternative food system—one that is, as Tansey calls for above, both sustainable and equitable. It is my hope that throughout this series, the topics we’ve addressed and the questions we’ve raised have peaked your interest—to whatever degree—and have led you to consider your place within this food system that we are all part of.
Posted by CSA Coordinator at 6:30 PM