by Farmer Richard and Farmer Andrea 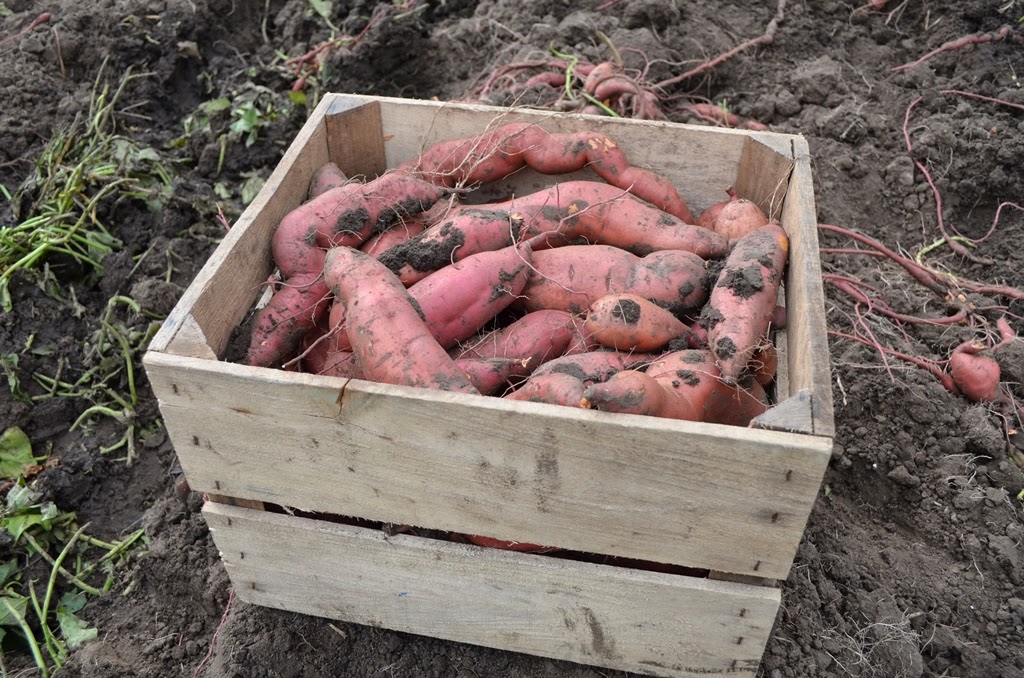 First there was the rush to get them planted, then the waiting and hoping game…will they get enough
warm days to form sizeable sweet potatoes? Next came the threat of frost, which for this tropical vegetable would mark the end of its life cycle. We scurried to get covers on them and just in time. Safe from frost and warm under their covers, they pushed through a few more weeks of growing time. Finally, it was time to harvest. After several good, hard days of harvest, over 45,000 pounds of sweet potatoes were safe in the greenhouse! Every year we anticipate the first tastes of sweet potatoes, and they are finally ready!

So where did sweet potatoes come from? Who knew a sweet little vegetable could have such a sordid history and cause so much controversy. The answer is, well– it depends on where you look for the answer. There are a lot of different theories and stories. In our research, we found they have been domesticated for at least 5,000 years. While there are no definite answers as to their origin, which was more than likely South America, it seems they made their way to Europe via Columbus somewhere in the late 15th century. There are references to sweet potatoes dating back to the 16th century in China. Asia and Africa come into the picture in the 17th and 18th centuries. Sweet potatoes are the most widely grown root by quantity in the world, although China feeds quite a bit of them to their animals. (How silly!) Most of the sweet potatoes grown in this country come from southern states and California.

Sweet potatoes are not senescent, which means they do not grow old and die. Tropical countries are able to replant a piece of the vine to regrow them year to year. We ‘propagate’ our sweet potatoes from a new shoot or vine growing from selected potatoes saved from last year’s crop. This does require quite a bit of greenhouse space in April, so we supplement our plants with ‘slips’ from the south. In the warmer climate, they can be produced in outside beds. This year we had a new supplier from North Carolina who is certified organic. It has been challenging to source organic sweet potatoes slips in the past, but this farm sent us a timely shipment of very nice slips. We plant a total of 16,000 slips on raised, plastic covered beds. We used a variety called Covington, which originated from The University of North Carolina. There are really only 3 (maybe 4) varieties of sweet potatoes that will yield well in our area of the North. Thus far, we like the Covington variety better than the Beauregard or the Georgia Jets.

Because it was a cool summer, we covered our 2 acre field in September to protect the sweet potatoes from frost and trap heat under the cover. They grew up very well to yield 46,000 pounds of very nice size and shaped tubers. The national average yield is 14,500 pounds per acre, so we are well above that number! Although that number is still below the 30,000 pound average per acre that a good southern grower might get, we are still pretty happy with our yield.

The average sweet potato consumption in the United States is down to about 5 pounds per person per year, although I bet the average CSA member’s annual sweet potato consumption is much greater than this. In the 1920’s that number was closer to 29 pounds per year, which is a huge change. In recent years, the average number is again on the rise, and that is being attributed to a renewed interest in their high nutritional value, including the beta carotene content.

Because the sweet potato is not senescent, it will never develop a thicker skin in the field. We must harvest them with ‘kid gloves’ so to speak and handle them with extreme care until they have cured fully. We cure our sweet potatoes in our greenhouse a full week at temperatures of 85° – 90°F and the same high humidity. This will ‘toughen’ up the skin so they can be easily handled and have a longer storage potential. The curing process also converts the starches in the sweet potatoes to sugars, thereby making them a truly “sweet” potato.

Sweet potatoes do store very well and they are so versatile that it’s hard to grow tired of them! They can be baked, roasted, boiled, pan-fried and even deep-fried. You can dice them up and add them to soups and stews. You can bake them and then scoop the flesh out and puree it. The puree can then be used in baked goods, desserts (sweet potato pie or cheesecake!), breads or as a spread or ingredient for pizza, quesadillas, lasagna, etc.

Because sweet potatoes are part of cultures all around the world, you’ll find many different ways to prepare them. They pair well with a variety of ingredients including apples, oranges, coconut, cranberries and limes. Common spices used with sweet potatoes include cumin, coriander, chiles, thyme, rosemary, chili powder, curry powder and more. Sweet potatoes can be accompanied by a variety of cheese, including Parmesan, fresh goat cheese, gouda or others. One of the most basic ways to enjoy a sweet potato is to simply pop the whole sweet potato into the oven and bake it until it is tender. Cut it open and garnish it with coconut oil or butter and a dash of cinnamon or chile powder. Captain Jack’s all-time favorite way to eat sweet potatoes is sweet potato French fries….hold the spice and add a side of gravy if you really want to win him over.

We have a lot more sweet potatoes to come your way. While we have our favorite ways to prepare them, we’re always looking for new recipes. If you have a favorite recipe, we’d love for you to share it with us! You can email them to csa@harmonyvalleyfarm.com.

1. Peel and mash the baked sweet potato. (You should have about ½ to ¾ cup)

3. Taste and add more vinegar and salt as required. Allow the vinaigrette to set for about 15 minutes, then taste and adjust seasonings to your liking. Use immediately or refrigerate in a tightly sealed container for up to 5 days. If the dressing thickens in the refrigerator, thin it with a tablespoon or two of water.

Variation: Add complexity to the dressing by substituting ¼ cup hazelnut or walnut oil for ¼ cup of the sunflower oil.

Serving suggestions: I (Andrea) was intrigued by this recipe and had to give it a try…I would never have thought to use sweet potatoes to make vinaigrette! I recommend using this vinaigrette to dress a fall spinach salad garnished with thinly sliced red onions, chunks of apples and toasted nuts. You could also use this vinaigrette as a dipping sauce or sandwich spread. You might even toss roasted vegetables with this vinaigrette for the last 5 to 10 minutes of cooking time. 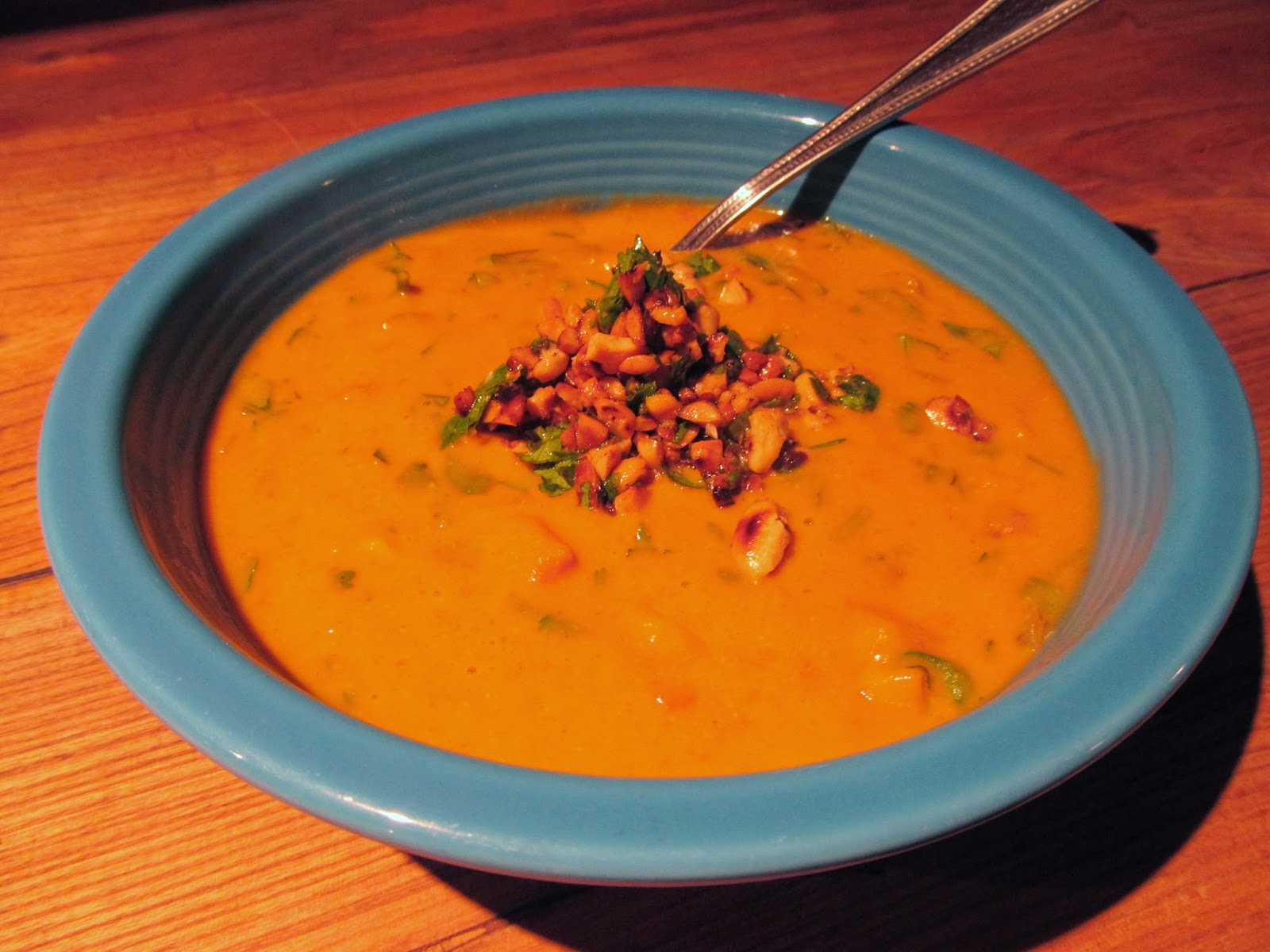 1. Wash the cilantro, including the stems, then separate the stems from the leaves. Finely slice the stems and set the leaves aside.

2. Warm the oil in a wide soup pot over medium-high heat. When the oil is hot, add the onion and cilantro stems, give them a stir, and cook until the onions have begun to soften and even brown in places, 5 to 10 minutes. Stir in the garlic, ginger, cumin, coriander, cinnamon, turmeric, pepper flakes and cloves. Add the tomatoes, sweet potatoes, 1¼ tsp salt and 4½ cups water. Bring to a boil, then lower the heat and simmer, partially covered, until the sweet potatoes are tender, about 30 minutes. Stir in the peanut butter. Taste for salt.

3. Puree 3 cups of the soup in a blender until creamy. Stir the puree back into the pot. Or, if you prefer a completely creamy textured soup, puree the whole amount. Taste for salt and stir in half the chopped cilantro leaves.

4. Chop the rest of the cilantro with the peanuts, leaving some texture, and mix in a few pinches of pepper flakes and the lime juice. Ladle the soup into bowls and add a spoonful of the peanut-cilantro mixture to each.
Posted by CSA Coordinator at 6:30 PM