by Sherri Froh-Byrne
We could not have asked for a more beautiful day for our annual Harvest Party on Sunday with mostly clear skies and temperatures right around the 70 degree mark! Our party kicked off at noon with live music featuring the sounds of Sonic Love Child filling the valley with Americana, classic country, folk and blues.
The music set the tone for the day and heightened the great spirits of all present! We also had a few activities planned such as “Pumpkin Ring Toss” which proved to be more challenging than we thought, but everyone who gave it a try had fun! I think Farmer Richard was one of the very few who was able to “ring” his pumpkin stem with the embroidery hoop!
We loaded up 4 wagons and made our way to the fields. Our first stop was the sweet potato field which was covered with giant field blankets to protect them from the threat of frost and to keep them warm. As we pulled back the cover, we were momentarily distracted by a Leopard frog that was sitting on top! The cover was caught by the wind and suddenly it had its own personal trampoline as it bounced freely before hopping off and landing on the ground.


We focused our attention back on the sweet potatoes, and with Farmer Richard’s direction, started to cut away the vines. We had many willing helpers to lift the sweet potatoes out of the ground. Several members who weren’t afraid to dig in the dirt walked away with bunches of sweet potatoes. Hearing the “ooh’s” and “aah’s” of children as the sometimes odd and twisted shapes emerged from the ground and watching each person hold up their sweet potatoes was priceless. Captain Jack and Richard determined we should let them grow just a few more weeks before we harvest the field.
Next stop, the carrot field! We arrived at the carrot field and listened while Farmer Richard explained where to find the different varieties before giving the go ahead to start pulling carrots. Just like in the sweet potatoes, the sounds of satisfaction after pulling up beautiful bunches of fresh carrots filled the air. The children were especially excited about the different colors of carrots that they found. Farmer Andrea walked with a group out to where the radishes are grown and many members came back to the wagons with nice bunches of radishes. Captain Jack played a game of “stick”, and somehow he ended up with a tail full of burrs. After a bit of grooming he hopped on a wagon and we were on our way to our final stop, the pumpkin field. 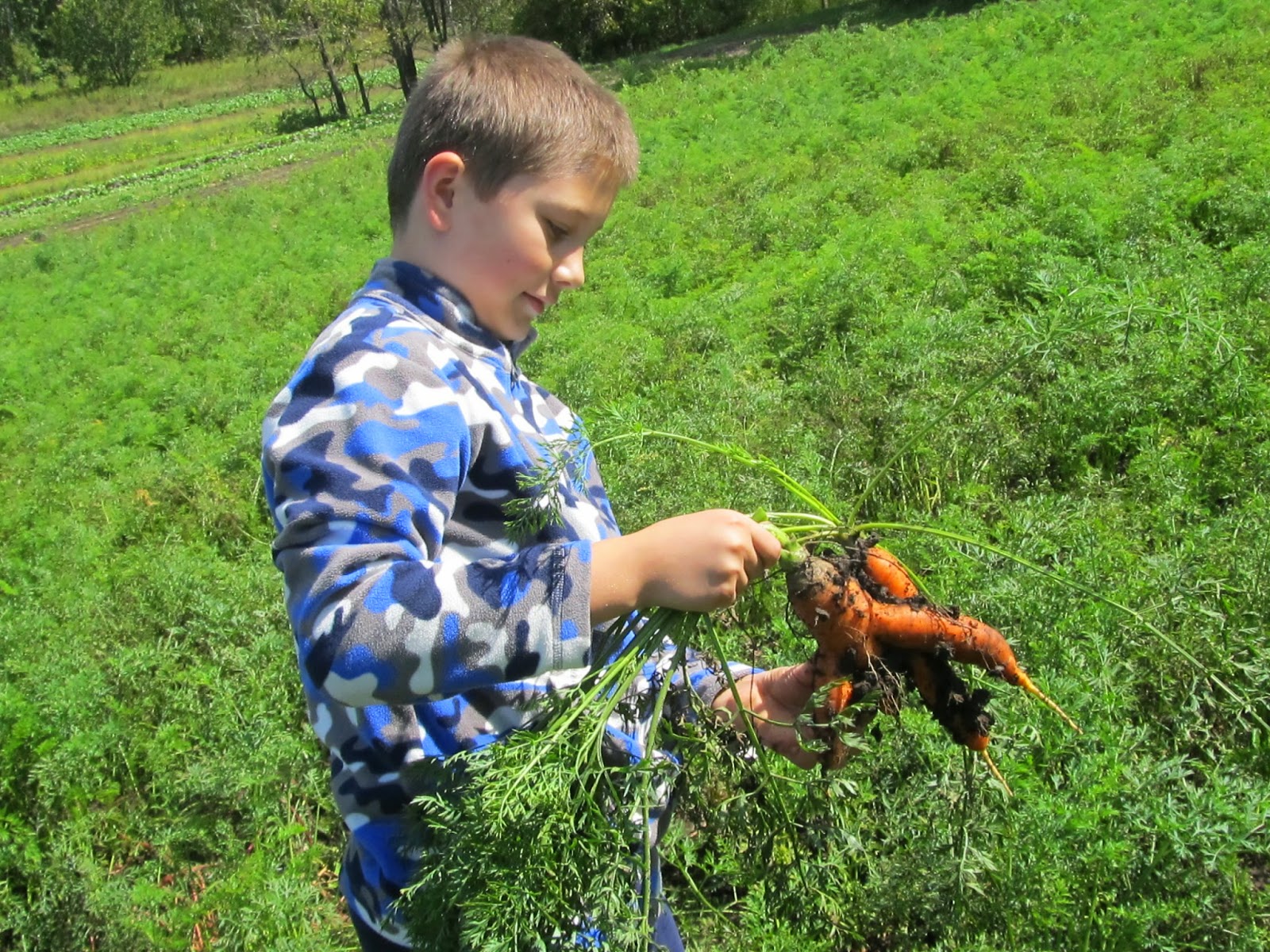 The highlight of the wagon tour was the pumpkin picking. Everyone was excited to start looking for their very own perfect pumpkin. Farmer Richard pointed out which variety of pumpkin was most suitable for making pumpkin pie.

A few people found some “warty” pumpkins that caught their eye and others found some that would most certainly make the perfect Jack O’ Lantern. Some of the children were on a mission to find a special pumpkin that Farmer Richard had etched with Andrea’s name. I heard the lucky one cry out “I found AJ! I found AJ!” That little girl was so proud of herself for finding Andrea’s pumpkin.

Captain Jack also had a pumpkin with his name etched into the skin that was found amongst all of the pumpkins in the field. It was fun watching everyone decide which one held the most beauty in their own eyes and I am certain that there was not one person who left the field feeling disappointed in their decision.
Now that everyone worked up an appetite with all of that field work, we headed back to the packing shed for our potluck. The food was plentiful. Chef Caleb made some delicious Vegetarian Tamale Pie packed with veggies and our own dried beans. This was accompanied by an abundance of salads, side dishes and desserts. I think that it is safe to assume that nobody left the party hungry. Sonic Love Child performed during our meal and for the remainder of the celebration. Again, the music was pleasing and I am certain that I saw toes tapping and lips moving as people sang along with a few familiar songs!

Our big activity this year was “Pack a CSA Box”. The mission of this game was to see who could assemble a box and pack it full of vegetables, fitting all of the vegetables from their tote into the box without crushing or damaging any items. Teams were not only racing against the clock and each other, but racing against Farmers’ Andrea and Richard. Since they have a bit of an unfair advantage due to their combined experience in CSA box packing, it was decided that they would have to compete while wearing blindfolds.
We had a tie between 2 winning teams who were able to complete their task in a record 43 seconds. Each of the winning teams took home a special box full of vegetables. The remainder of the teams took home the produce that they had packed and we had additional prizes for everyone participating in the game. Farmer Richard and Andrea were great sports for playing blindfolded. They did come in last place, but certainly their reward was the greatest as because of them and their effort, everyone who attended this year’s harvest party had a super time.

All in all, it was a very successful harvest party. So many people commented on how they couldn’t have asked for a better day for a drive to the farm! It was great to meet so many people and for Richard and Andrea to see so many familiar faces of people who have supported the farm and encompassed the whole CSA concept. Thank you to all of the Harmony Valley crew who showed up to make this day successful by helping with set up, assisting with parking, driving the tractors and clean up. Thank you to those of you who came, and to those of you who couldn’t make it, we hope to see you next year!

Posted by CSA Coordinator at 6:30 PM