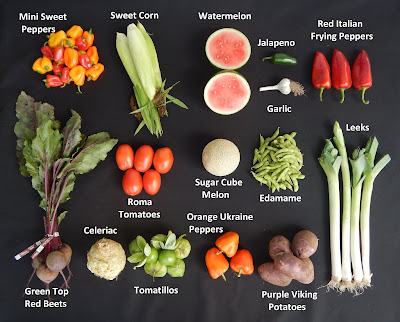 This week we move into late summer as we start the transition into fall.  Peppers are ripening like crazy, zucchini production is tapering off, melons and watermelons are nearly finished, and we’ve started winter squash and root crop harvest.  I enjoy cooking with vegetables coming in this time of year as most of them are very versatile and can play well with summer vegetables and fall vegetables.  A good example of this is this week’s featured vegetable, leeks.  Leeks are a late season allium, the last allium we’ll harvest this year.  There are classical preparations that pair leeks with summer vegetables such as peppers and tomatoes, but they also complement fall vegetables like spaghetti squash and celeriac.  So this week we’re featuring two recipes.  The first is a Herbed Leek Tart (see below) that is very simple and in terms of tarts, it’s on the rustic end.  You don’t need a tart pan to make this one, it’s more of a crostata where the pastry is just laid out on a baking sheet and is folded around the filling.  This filling is a simple leek, herb and sweet pepper filling.  This could serve as dinner along with salad or a bowl of soup.  Leftovers reheat well and are good eaten either hot or at room temperature.

The second recipe this week pairs leeks with celeriac, more of a fall root vegetable.  This is a simple recipe for Celeriac & Leek Soup (see below), courtesy of Farmer Andrea Bemis.  It’s a lean soup based on leeks, celeriac and potato to thicken it.  At the end you stir in a dollop of crème fraiche or yogurt to add some richness to the soup and bring it together.  The combination of leeks and celeriac makes a nice silky, smooth soup.

If you don’t use celeriac to make the featured soup recipe, consider making this Wild Rice & Celeriac Gratin.  You can keep it vegetable based, or it’s also good with chunks of chicken or turkey mixed in.

This week in our Facebook Group a member shared this recipe for Crunchy Asian Ramen Noodle Salad, a recipe I’m anxious to try.  This salad is built off of a base of cabbage and is topped with toasted almonds and ramen noodles as well as mango and edamame.  The whole thing is dressed with a simple Asian vinaigrette that you make by shaking all the ingredients in a jar.  You can make this salad now, or save this recipe and squirrel away some edamame in the freezer so you can make it later in the fall or winter when cabbage is abundant.  This is a nice refreshing salad to liven up your winter mealscape.  I also think it would be nice to add some thinly sliced sweet peppers or shredded carrots for some extra flavor and crunch.

While tomatoes haven’t been as plentiful this summer, the tomatillos have been producing very well!  If you’re tomatillo-ed out for now, I encourage you to make another batch of tomatillo salsa and tuck it away in the freezer.  If you don’t want to make salsa right now, at least clean the tomatillos and freeze them so you can make salsa later!  Tomatillo salsa can be used for more than just dipping chips in it.  Here’s a few ways you can put it to use.  Check out this recipe for Avocado Tomatillo Breakfast Tacos which are topped with Roasted Tomatillo Salsa.  These tacos call for spinach, but you could easily substitute this week’s beet greens in place of spinach.

If you’re going to make a batch of tomatillo salsa, you might as well use it for multiple recipes.  Here’s another recipe, courtesy of the same blog (loveandlemons.com), for Smoky Sweet Corn Tostadas.  For this recipe, you make a creamy sweet corn hummus that gets spread on crispy tortillas and topped off with sliced jalapenos, onions and tomatillo salsa.

If you didn’t have a chance to make the Red Pepper, Lentil & Tomato Salad featured in last week’s newsletter, I encourage you to check it out this week.  It’s easy to make and can serve as a main dish or a side salad.  It’s also very colorful with sweet peppers and grape tomatoes in shades of red to orange!

This may be the last week for watermelon.  The easiest thing to do is cut it in half, grab a spoon, position yourself in a comfy chair on the patio and just eat it right out of the rind!  If you want to put forth a little more effort, but not too much, make this 1-Ingredient Watermelon Slushie!  While we’re making drinks, what better way to mark the end of melon season than Sangria!  Here’s a recipe for Chardonnay Cantaloupe Sangria.  While it calls for cantaloupe, I think this would be delicious made with any of the melon varieties in this week’s box.

I don’t typically pair beets and corn together, but why not?!  This is a simple, refreshing recipe for a Beet & Corn Salad with cilantro and onions dressed with a light vinaigrette.  It would be a nice accompaniment to grilled fish or chicken or serve it alongside the Herbed Leek Tart for a full vegetarian dinner.

I think that concludes this week’s cooking adventure.  Pretty soon we’ll be picking the Korean chili peppers, which have become one of my favorites for making chili garlic sauce to stash away in the freezer.  I’m also excited to start experimenting with recipes for the new Black Futsu Pumpkin!  Jicama will be coming in, likely before the end of the month.  There are so many delicious things yet to come!  Have a great week! 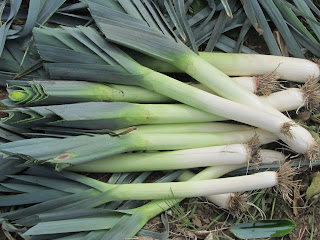 We’ve been enjoying a variety of vegetables in the onion/allium family since our first box all the way back in May.  From ramps and chives to overwintered spring onions, scallions and most recently sweet onions.  This week we’ll add leeks to the list.  Leeks are a favorite fall allium that, as Chef Deborah Madison says, “add more of a whisper and less of a shout.”  Leeks have a more delicate, mild onion flavor and are cooked using more delicate cooking methods to yield a soft, silky finished product.  They have fewer sugars than onions, so they will not caramelize in the same way as an onion.  It’s best to sweat leeks, meaning you cook them at a lower, more moderate heat to soften them but don’t try to brown them.

Leeks have a long white shank that turns to more of a bluish green color as you reach the top of the leek.  The shank is made of many thin layers and is the portion of the leek most often used.  However, the green portion on top is equally edible and at the very least should be added to stock for flavor.  Throughout the growing process, dirt is hilled up on the leeks to cover the shank and block sunlight which keeps it white.  As a result, dirt may get between the layers.  While you need to take care to carefully clean the entire leek, the upper portion may have a bit more dirt between the layers and may need a little more attention.  I find it easiest to wash the exterior of the leek and then slice them.  Place the chopped leeks in a sink of clean, cold water and swish them around to remove any dirt.  Remove the leeks from the water and place in a colander to drain.  If there isn’t much dirt between the layers, you may also just place the sliced leeks in a colander and rinse them.

Leeks pair well with many fall vegetables including potatoes, celeriac, and fennel.  They are often incorporated into cream soups, gratins and egg dishes such as quiche.  A traditional use for leeks is to make Leek & Potato Soup, of which there are many variations.  In our opinion, Purple Viking potatoes are one of the best potatoes to use for Leek & Potato soup, which is why we included them in this week’s box!  It is best to take your time and cook leeks more gently and slowly over medium heat. Sauté them over low heat to just sweat them until softened. When cooked in this manner, leeks become creamy and have a silk-like texture.  They pair well with white wine, lemon, cream, cheese, apples, walnuts, chicken, bacon, fish and fresh herbs to name just a few ingredients.

Store leeks loosely wrapped in plastic in the refrigerator until you are ready to use them.