Sweet Corn & The Science Behind the Selection

“Some crops we grow for profit, others, i.e. sweet corn, we grow to make friends.” –Farmer Richard, 1980

The genetics of corn breeding have changed dramatically since I started raising sweet corn in the 70’s.  Even then we sought out the exceptional!  Sweet corn varieties are classified with terms that describe and classify their genetic traits.  Back then, all corn was classified as SU (sugary), but we found that white corn had less pericarp (outer skin on the kernel) which made it much more tender.  ‘Country Gentleman’ was an heirloom white corn with irregular rows, but it was tender, sweet, and had great corn flavor.  While these were superior tasting varieties, all the SU corns had a rapid conversion of sugar-to-starch which shortened the shelf life.  If promptly cooled and iced, you had a few good days, but eating the same day was by far the best! 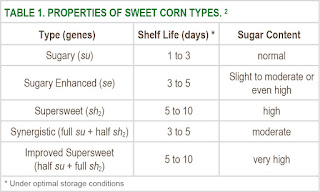 Then came the SE (sugar enhanced) varieties.  The conversion of sugar-to-starch was much slower and we found bi-color corn to be much more tender, but still the rapid cooling and cold temperature kept the SE corn very sweet for several days.   Next, Sh2 (shrunken gene) varieties were being produced.  The sugar-to-starch conversion was greatly slowed, but they had a thick pericarp, read “tough and not tender.”  Some newer Sh2 and SE ‘synergistic’ varieties have managed to achieve most of the desirable characteristics including good corn flavor, sweetness, slow conversion of sugar-to-starch, plus cold soil vigor and a tight husk on top to deter corn earworms from entering the ear.  All of the above improvements have been accomplished with natural breeding.  Unfortunately, in the last 10 years, most conventional sweet corn is now genetically modified to produce the Bt toxin in every part of the plant.  But in addition to killing root worms and earworms it has been devastating to other butterflies, including the Monarch.  Aside from the Bt toxin, GMO corn is also modified to be tolerant to Roundup Weed Killer.  GMO corn is not labeled, so as a consumer you have to ask and trust the answer.  GMO varieties are not allowed for certified organic growers, so if you wish to avoid GMO sweet corn, your best bet is to choose certified organic.  Our overall goal is always to produce “the best corn ever!”  Thus, we continue to carefully choose varieties, plant the seeds in rich organic soil, and cross our fingers for cooperative weather.  But the better the corn, the more wild critters come to try and eat.

Pest control is quite the ordeal with sweet corn.  We put up an 8 foot high fence for deer.  It works, but we have to check daily for breaches.  The cute little raccoons are more persistent.  It takes two electric wires close to the ground and in place to keep them out before they even get a taste.  We also worry about the birds.  The beautiful red winged black bird plus many other birds love a good ear of corn!  They peck the top off the ear to get to the sweet juicy kernels.  We put up scare eye balloons on tall poles with many shiny streamers that flash in the breeze as well as several life sized hawks and owls that turn their heads from side to side.  We try to make it a scary place for the birds before the birds get a taste!

If we can manage to keep the raccoons and birds out, we aren’t in the clear yet.  There’s the corn earworms, a dusty gray moth that migrates yearly from the south.  I liked the image of large flocks of bats leaving their caves in Texas to intercept and feed on the moths before they can get to us.  But, sadly, the health of the bat populations has been compromised by agricultural chemicals, specifically neonicotinoids, and many are unable to fly high enough to intercept the corn earworm moth.  Thus we are left with a greater number of earworms migrating to the north that we now have to deal with.  Instead of combatting this pest with harmful chemicals, we use a pheromone trap to monitor the earworm moths during their night time visit to the corn field.  We haven’t caught one yet, but we check our traps daily now!  If our timing is good, we can have Bacillus thuringiensis (Bt) available for them to eat when they hatch on the fresh corn silks.  Bt is a naturally occurring bacteria that affects only lepidopteron worms.   Our use of Bt affects only the worms on the corn ears, while GMO corn pollen drifts for miles, spreading the Bt toxin to non-target species, especially the monarch larva feeding on milkweed.

Ok, is the corn ready now?  No, patience.  Check the fence, check the traps, and watch for birds daily.  As the ear fills the tip goes from a point to having “shoulders,” which is the kernels, full to the top.  The last week before harvest, we pick a few ears every day to look and taste.  The difference between a good ear of corn and an excellent ear of corn can be the difference of just a day or two.

Finally picking day comes!  One of the most skilled jobs on the farm, picking corn is done only by a few very experience pickers, all of whom were trained by me, Farmer Richard.  It takes sharp eyes to see the full shoulders through the husk.  Placing your hand over the top, if you feel a full ear with a soft tip under your hand, you twist down and turn, the ear is off the stalk and into your shoulder bag.  Or if your hand feels a slightly stiff tip and not quite full top, you leave the ear to be picked a few days later.  The decision is made in less than a second and you move to the next ear.

We average harvesting 100 ears per hour, including packing and icing in the field, before the ears come home to the cooler.  We have four fields of sweet corn this year.  The first early corn was planted only half an inch deep just before a couple of warm sunny days to avoid the colder, deeper soil.  It worked, they germinated, but the birds ate 50% of that shallow planted crop.  This is why there were only a few ears per box last week.  The second crop is abundantly ready this week, but space is limited in the box, so we offered it as a Produce Plus item.   We are happy to have received so many orders for it!  Fresh frozen corn has always been a favorite winter treat of ours.  With all due respect to organic processors, you can do better!

We have two more promising crops to go, if we can beat the critters to it.  We plan to get as much excellent corn to you as we can manage and hope to make some long-time friends. Please let us know if we reached the status of “best corn ever!”