Looking to the future, the multigenerational impact of agrochemicals

Honesty is the best policy, and honestly—I wish I weren’t writing this article.  As I’ve thought about this week’s topic and how this article might come together, I’ve had a whole mess of feelings ranging from mad to sad with a little bit of anxiety and overwhelm mixed in between.  The topic of this article spawns from last week’s newsletter where we reported some recent news highlights in the world of agriculture as featured in The Organic & Non-GMO Report.  One of the articles we mentioned from their most recent publication was one entitled “Toxic legacy: new science reveals generational harm of pesticides.”  The article reports on the work and observations of Dr. Paul Winchester, a pediatrician currently practicing in Indiana.  The introductory paragraph starts as follows:

“When Paul Winchester, a pediatrician, moved to Indiana from Colorado in 2002, he noticed something disturbing—a high number of birth defects.  ‘I was used to the number of birth defects I should see in a community hospital, and I saw many more in Indiana,’ says Winchester, who is medical director of the Neonatal and Intensive Care Unit at St. Francis Hospital in Indianapolis.”

Winchester started digging in to figure out the cause for his observations, and his research pointed him to the herbicide atrazine.

Atrazine has been widely used as a herbicide in agriculture for many years, especially in Midwestern states where corn and soy are major row crops.  If you take a look at the U.S. Geological Survey’s map of estimated atrazine use in the U.S. in 2015,  you’ll see some of the Midwestern states including Indiana, Illinois and Ohio are amongst the states with the greatest annual atrazine use.  Unfortunately, atrazine has a relatively long half-life and is not strongly absorbed by the soil, thus runoff from areas of use carries atrazine into groundwater, rivers and streams.    In Andre Leu’s book, The Myths of Safe Pesticides, he cites that “In lakes and groundwater, atrazine and its breakdown products are persistent, and can persist for decades.”  Why is this a problem?  Because atrazine is a known endocrine disrupter and can negatively impact human hormonal systems. 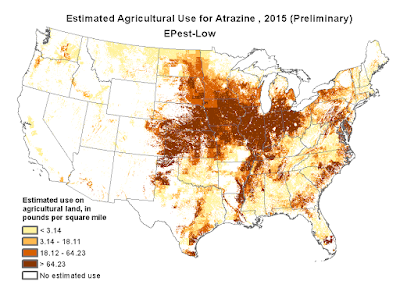 The article in The Organic & Non-GMO Report reports that recent research indicates that atrazine has epigenetic effects, meaning exposure to atrazine can cause changes to human DNA that can then be passed on to subsequent generations.  In September 2017, Winchester, along with a group of researchers, published the following research article on PLOS One:  “Atrazine induced epigenetic transgenerational inheritance of disease, lean phenotype and sperm epimutation pathology biomarkers.”.  If you are interested in the methods, statistics and further discussion of the observations made in this study as well as research that preceded this study, I encourage you to read the full research article.  The purpose of their study was to “investigate the potential that the agricultural herbicide atrazine may promote the epigenetic transgenerational inheritance of disease in both male and female rats.”  Winchester’s group exposed the first generation to atrazine, but the three generations following did not have direct exposure.  What they found was that the third generation actually had more health problems than the earlier ones, suggesting that epigenetic changes to DNA caused by exposure to atrazine can be passed on to subsequent generations resulting in negative health outcomes.  In the article, “Winchester calls the discovery of the link between chemicals like pesticides and epigenetic changes leading to disease ‘the most important next discovery in all of medicine.’"
Winchester is also concerned that glyphosate, the most heavily used herbicide around the world, may also have multigenerational effects.  He has studied glyphosate exposure in pregnancy and, in one study, found that over 90% of women in the study had detectable levels of glyphosate in their urine while pregnant.  Whereas atrazine ends up in our water supply, glyphosate is more likely to end up in the food supply.  Glyphosate residue has been detected in food samples ranging from snack foods to cereal as well as products containing corn and other grains to name just a few.  We’re eating it! 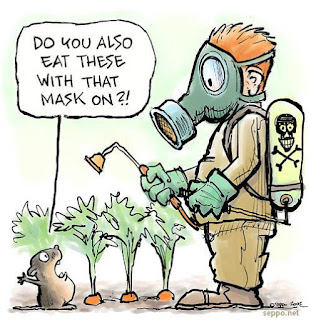 Atrazine and glyphosate are just two of the chemicals Winchester has researched, but there are many more.  Here’s what Winchester has to say about them:  “Every one of the chemicals tested so far produces infertility, and the industrial world has reached the lowest level of fertility on record.  We are below replacement levels in most industrialized countries including the U.S.  This is looking at your own species extinction.”

I grew up in rural Indiana on our family farm where my dad was born, farmed with his dad and brother, and still farms with my brother.  In 1963, he and his father decided to start using atrazine and continued to do so until about 2000 when they stopped using it and switched to a different herbicide because the weeds they were trying to kill had developed resistance to atrazine.  Around 2000 they also started using glyphosate because one of the farms they were renting had some persistent giant ragweed and the landlord was putting the pressure on them to clean it up.  Herbicides were and still are used by the majority of farmers in the community I grew up in.  I don’t know the full extent to which I’ve been exposed to chemicals such as atrazine, but I fully remember the putrid smell of chemicals that were stored on one end of the shed and the area just outside that shed where they were mixed and the sprayer was cleaned out.  So when I read this article I do get chills down my back.  The people we’re talking about are my people.  It’s me.

Sadly, the multigenerational effect of most agrochemicals being used has not been formally studied.  However I’d like to point out that regardless of good research to document safety or harm, the chemicals have been and continue to be used.  We are all part of a large population study, one that is being conducted without proper consent.  If in fact there are multigenerational effects of exposure to chemicals such as atrazine and glyphosate, I fear the day we’re able to connect all of the dots and realize the final outcomes.  Sadly, once we understand the full extent of the impact, it may be too late to reverse the damage and many people will suffer the damaging impact on their health and well-being.  People in the community I grew up in have suffered from and died from a variety of cancers, including my own mother who died of breast cancer in 2009.  While it’s hard for me to piece together all of the facts, I suspect my mother was exposed to agrochemicals both as a child and as an adult.  She grew up in rural Michigan on a farm where we know chemicals were used in the 1960s.  While I am not sure what was used prior to that time, their farm was downstream from a Dow chemical plant that was, in my opinion, too close for comfort.  They sourced their water from a shallow well for many years.  Her two sisters preceded her in death, both with breast cancer.  Her mother lived into her 80’s, but battled breast cancer several times and had pancreatic cancer at the time of her death.  This leaves me suspecting that I’m not the first generation to be exposed to these chemicals, but more likely I may be the second generation.

I’m grateful for the knowledge I have now and feel that I am better equipped to make informed decisions about my environment, the water I drink and the organic food I choose to eat in order to minimize my exposure to toxic chemicals.  What I don’t understand is how the harmful effects these chemicals are having on our health and our environment can continue to be ignored.  I realize I’m not the only person who has experienced the loss of a family member to cancer or has dealt with other negative health consequences related to chemicals, but that’s an experience I wouldn’t wish upon anyone and feel an urgency to stop it from happening anymore!  This research is too close to home and is the reality that reminds me that none of us are immune to this problem.  Whenever I ask how these things can continue to be ignored, the infuriating answer I get always points back to money, profit and economics. 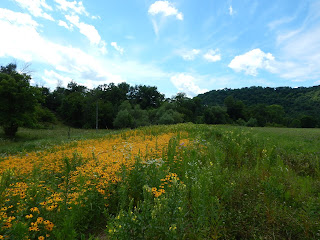 What will it take for the scales to reverse when we value the preservation of human health and the health of our environment over the power of the mighty dollar?  Consumer and public demand for clean water and food is the change we need.  It’s up to all of us to make this happen.  Thank you for choosing to support organic agriculture and for feeding your families certified organic food.  That’s a start.

Thank you, Andrea, for this informative and impassioned piece. You and Richard give us hope, along with beautiful and delicious produce!